Difference between Ghosts and Demons

Key Difference: Ghosts are the souls and spirits of deceased humans. Demons are believed to supernatural beings that are often malevolent.

People often get confused between ghosts and demons and believe that any supernatural activity has to do with demons interfering with their lives. Sometime the actions that are performed by ghost are similar to those of demons and can often get a person confused between the two. However, ghosts and demons are entirely two different things and should be treated differently. Also see: Ghosts Vs. Spirits 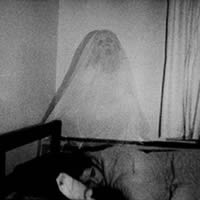 According to traditional belief and much folklore, ghosts are actually believed to be the soul of deceased humans. They can appear to be visible, invisible or any other manifestation to the living. The manifestation could vary from the ghost being invisible, wispy forms, in light as well as realistic visions. Ghosts are often believed to be bad even if the person was good. They are known as restless spirits that did not attain peace due to some type of deed that was incomplete.  A ghost is often believed to be tied to the human world because of something that was left undone which is why they are restless and dangerous. The attempt to contact a ghost of a spirit is known as necromancy or séance. Ghosts are often believed to be tied to the place that they lived in or were at for a long period of time. They are also believed to haunt objects or people that they were associated with in life. Many scientific skeptics believe that the ghost sightings are nothing but the result of optical illusions. Many people also believe that a change in the person’s hormones in the body or any big changes in that person’s life could also cause them to see things that may not be there or trick their body into seeing things.

An interesting theory about ghosts is that they often follow the paths or routines that they did when they were alive. This continues to happen even if the layout of the house has changed, which is what makes us see them walk through walls or climb stairs that are not there. They would still follow the layout that was there when they were alive. They could also be seen performing odd jobs such as lighting lanterns, washing dishes, cooking, etc. These are also jobs they must have performed when they were alive. The popular show Supernatural, along with many other ghost hunters claim that in order to rid a place of ghosts, they should either allow them to fulfill the unfinished deed that is keeping them here or to burn their bones and give them rest. Also see: Ghost Vs. Devil.

In religion, occultism, literature and folklore, demons are believed to be supernatural beings that are often malevolent. Many religions claim that demons are evil angles or fallen angles that have been cast from heaven due to their bad deeds. Other popular culture makes them believe that they are children of a certain angel that was cast from heaven. This angle is referred to as Lucifer that was thrown from heaven from trying to overthrow God. The demons are believed to be the children he had from the various relationships with the humans on Earth. According to experts, they believe this is the reason that the demons have the ability to possess humans as they are also partially humans. Also see: Ghost Vs. Vampire

The word ‘demon’ is derived from the Ancient Greek word ‘daimōn’ which denotes “a spirit or divine power.” The Greek word did not have connotations about demons being evil or malevolent and on the contrary, were referred to as “good-spiritedness” or happy. Many religions believe that it is easier for demons to possess people who have sinned as opposed to be people who are nice and generally good. Some suggest that a demon must receive approval before it can inhibit a body, while other claim that they choose their bodies as they see fit. If a demon has possessed a human body, the person may be bed ridden with high fever or be forced to do evil deeds that the demon tells them to. A person suffering from demon possession must be exorcised by a professional priest using the original Latin text, to be free from the demon's control.

The terms and demons have often been changed or manipulated as people saw fit. There are not proper definitions as to what demons and ghosts are and neither are there scientific proof of their existence. It is firmly based on the belief of a human if they choose to believe or no. Many people use the definition set by the Bible for ghosts and demons, while this definition and characteristics change depending on the religion and culture.

I was hearing foot steps and the toilet flush when I was the only person home after my father took his own life in the house shortly after my mother died. After selling the house to a single young girl I later discovered she resold it within weeks to a man who told my brother that the house is haunted. I believe it was a demon . Not a ghostly human. Demon trying to decieve me into thinking that ghost are dead humans. The dead have no contious thought. Any ghost you may encounter is a demon, tell it to leave in the name of jesus

yes, huge different. believe in god , must believe that demon and ghost do exist. but stay faithful in god. having experience in paranormal world, which,, not every human being can see the different world.

There is no difference in ghosts or demons, its demons mocking the dead. It really breaks my heart to see people being deceived by these liars.

A ghost is a demon trying to decieve you. I had one in my house after my father killed himself in the house shortly after my mother died. I sold the house and heard that the new owner said its haunted. Theses buggers never give up. Thank fully I know the dead have no contious thought, no ghost. Demon