Difference between Gtalk and Hangout

Google Talk was an instant messaging service by Google. It was integrated with GMail and offered both text and voice communication. It was often called as "gtalk" or "gchat" by its users. It was originally launched on August 24, 2005. By 2006, it had been integrated with GMail, while still being available for use as an individual chat messenger.

However, in 2013, Google replaced Google Talk with Google Hangouts. Google Hangouts is an instant messaging and video chat platform. It was officially launched on May 15, 2013 during the keynote of its I/O development conference.

However, as its services were becoming increasingly fragmented and non-unified, the decision was reached to ‘scrap the existing Google Talk system and code a new messaging product through a collaboration with multiple development teams.’

The main reason for the new platform was to provide an integrated platform for all of its products. Prior to Hangouts, Google had three messaging products implemented concurrently within its services, including Talk, Google+ Messenger, and Hangouts, a video chat system present within Google+. Hence, Google Hangouts created an integrated product. Google has also stated that Hangouts is designed to be "the future" of its telephony product, Google Voice, and integrated some of the capabilities of Google Voice into Hangouts.

Hangouts is available through the Gmail or Google+ websites, or through mobile apps available for Android and iOS. However, unlike Google Talk, Hangouts cannot be used to chat with other XMPP open standard protocol based messengers. 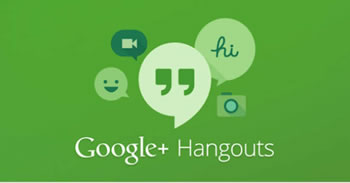 Hangouts allows users to hold conversations between two or more users. The chat histories are also saved online, which allows them to be synced between devices. A "watermark" of a user's avatar is used as a marker to indicate how far they have read into the conversation. Photos can be shared during conversations, which are automatically uploaded into a private Google+ album. Furthermore, rsers can also now use color emoji symbols in their messages. Users can also perform a group video chat with up to 10 users at a time.

From Android 4.4, Hangouts is also integrated with text messages sending and receiving functions. In Nexus 5, it is the default SMS app. In other Android phones, this feature is optional.

While Google has removed support from Gtalk, and has discontinued the service. Gtalk is still available from some third party providers as a stand alone application without integration in to other Google services. However, Google will not be supporting this Gtalk.

Comparison between Gtalk and Hangouts: