Key Difference: Harvard College only refers to Harvard's College of Arts and Science, where students receive undergraduate degrees such as bachelor’s degree. However, Harvard University includes the Harvard College and all the other graduate schools including Harvard Business School, Harvard Medical School, etc. and the various research centers.

Almost everyone has heard of Harvard, either in movies or in real life. It is one of the most prestigious universities in the United States of America. It is also known for its expensive tuition and the breath taking campus. However, Harvard College and Harvard University are two different things.

Harvard University is an Ivy League private university located in Cambridge, Massachusetts. It was established in 1636 by the Massachusetts legislature. Harvard is the oldest institution of higher learning in the US. It was originally known as ‘New College’ or "the college at New Towne", but was renamed on March 13, 1639. Harvard is renamed after John Harvard, who donated half of his estate and majority of his library collection to the school. During the early years of the college, it was used to train Puritan ministers, Congregationalist and Unitarian clergy. According to an early college brochure, the college was founded in regard "to advance learning and perpetuate it to posterity, dreading to leave an illiterate ministry to the churches".

Though, the college was originally male dominated and women were not allowed to study there, another institute Radcliffe Institute for Advanced Study was created for women. Harvard became co-ed after its merger with Radcliffe in 1977. Harvard has a 210 acre main campus, along with 22 acres of Medical campus and 359 acres of Allston campus. According to Forbes, the school has been credited with churning around 8 US presidents and sixty-two living billionaires. It also has 75 Nobel Laureates that have been student, faculty or staff affiliates of the college. The Harvard University Library is also the largest academic library in the United States. 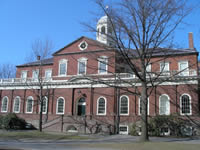 Harvard College, although a part of Harvard University, differs from the university. It is one of the two schools that are located on the Harvard University campus that grants undergraduate degrees. The Harvard College awards degrees such as Artium Baccalaureus (A.B.), Scientiarum Baccalaureus (S.B.) and other degree programs such as Master of Arts. The A.B. degree requires four years for completion, while S.B. requires five years. The special courses are also five year programs. Almost all undergraduates are required to live on campus in dormitories or upperclass Houses.