Key difference: HP Envy and HP Pavilion, both are all-in-one touch screen computers. They both consist of Windows 8, good design and touch control, but the difference between the two is based on their performance and how they work.

The HP Envy and HP Pavilion series are a line of Laptops and other products manufactured and sold by Hewlett-Packard. They are a line of personal computers and offer a range of Home and Home Office products.

According to Wikipedia, in 1995, the HP Pavilion PC marked the company's introduction into the home-computing market. The HP Company produces a low-cost, high-speed infrared transceiver that allows wireless data exchange in a range of portable computing applications such as phones, computers, printers, cash registers, ATMs, digital cameras and more. 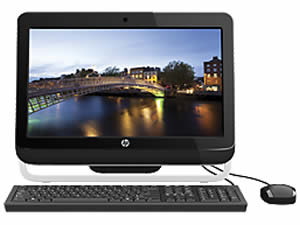 HP Pavilion is a touch smart all in one PC. With a third-generation 2.8GHz Intel Core i3-3220T dual-core processor and 6GB of RAM, the HP Pavilion Touch Smart 23 is fairly basic for a mid-range system. The Touch Smart features a 23-inch display with 1920 by 1080 resolution, offering support for 1080p HD content and providing plenty of room for multitasking with two or more tiled windows. The screen of the computer is slightly recessed with a black plastic bezel surrounding the display.

The accompanying DTS Sound is very good, with strong bass and crystal clear voice, even at high volumes. This is one system that can actually fill a room with sound, and does it without any unwanted buzzing or distortion. This Touch Smart PC comes bundled with an inexpensive wired keyboard and wired optical mouse. The keyboard feels lightweight and has Windows 8 commands and media controls built-in. The mouse is less impressive, it shows every smudge and the construction is very flimsy.

On the right-hand side of the system is a tray-loading optical drive i.e. DVD and RW DL. On the left, there are connections for headphones and a microphone, an SD card slot, and two USB 3.0 ports. On the back are four more USB 2.0 ports, along with line-out for audio. Networking is also built-in, with an Ethernet connection and 802.11n Wi-Fi.

The all-in-one PC also boasts of a 1TB 7,200rpm hard drive, offering plenty of space for your programs, files, and media library. The system comes with preinstalled Windows 8, along with a few extras, like a 60-day trial of Norton Internet Security, a 30-day trial of Microsoft Office 365, and a handful of games. HP also offers tools for organizing and sharing your music and photos with HP Connected Music and HP Connected Photo.

All things considered, the HP Pavilion Touch Smart 23 is a good choice for the buyer who wants a PC or just wants a touch-capable all-in-one for day-to-day use. 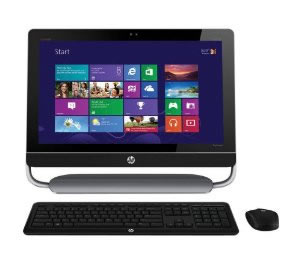 HP Envy has a third-generation Intel Core i7-3770S processor, upgraded 3D graphics, loads of system memory, a huge hard drive, and that 1080p 10-finger touch screen. It has the touch interface to take advantage of Windows 8 on a desktop.

Windows 8 on the desktop really only comes alive when paired with a touch screen, the HP Envy comes with a full 10-finger capacitive touch screen that's quick, responsive, and has a full edge-to-edge flush glass surface. It comes with a 1080p full HD 1,920-by-1,080 resolution, giving you the full screen you need when viewing HD videos online or using the included Blu-ray player.

HP Envy includes a wireless keyboard and mouse. You can use the mouse for precision tasks and use the touch screen for broad navigation and Windows 8 gestures. In addition to the HDMI-in port and slot-loading Blu-ray drive on the right, Envy comes with a pair of USB 3.0 ports, audio jacks, and a SD card reader on the left. The headphone jack and speakers are Beats Audio branded, and sound from the speakers is sufficient for home office or den use.

The system comes with a few added programs, including eBay, Snap-fish, etc. They are mostly relegated to tiles in the Windows 8 interface, where they help populate the screen to make it look less empty in the Win 8 system. There are a couple of icons on the desktop mode, but they can be easily tossed in the recycle bin.

The Envy has an system upgradeable memory up to 3TB, 200rpm SATA hard drive, a quad core Intel Core i7-3770S processor, and 2GB Nvidia GeForce GT 630M graphics. The device memory is good enough to keep a family's photos, videos, and music together.

The HP Envy 23-060qd Touch Smart comes in with most of the features that one would want on a high end all-in-one desktop and it easily outclasses its competitors.