Difference between Hyundai i10 and Hyundai i20

Key Difference: i10 and i20 both are cars from Hyundai Motor Company. i20 is a successor to i10. 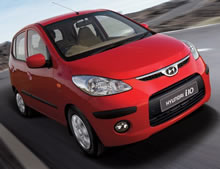 The i10 was launched in New Delhi, India on 31st, October 2007. The car is produced at the Chennai plant in India. The Hyundai i10 is a hatchback car that is made for city drive and replaced Hyundai Atos. The car market is waiting for the new generation of the car that is expected to release in early 2014. It has features like electric windows, ABS, air conditioning and an RDS radio/CD player with a USB connection.

On the other hand, The Hyundai i20 is also a hatchback car and is the successor of the i10. The i20 was first displayed at the Paris Motor Show in October 2008. The i20 is a car that is available in three and five-door versions in different markets. Hyundai has stopped the manufacturing of its hatchback car 'Getz' in many markets as the demand of it reduced due to the launch of the i20. However, there are markets like South Korea and North America that does not have i20 available for customers as they have the Accent hatchback. Also, the sale of i20 has been stopped in the Indonesian market due to low sales because of the intoduction of the Accent/Grand Avega.