Difference between Ice and Dry Ice

Key difference: Both, Ice and Dry Ice are used for their cooling properties. The key differences between ice and dry ice lie in their chemical structures, properties and their contradictory temperatures.

People are often confused with the terms ‘ice’ and ‘dry ice’, because of their similar looks and functionality. Though, one exudes steam when in contact with water, and the other simply melts into water, ice and dry ice are very different from each other.

Ice is a naturally occurring inorganic solid with a planned structure i.e. it is plain water frozen into solid state. It is widely available in nature and is considered a mineral because of its regular crystalline structure. It is transparent or opaque or bluish-white in color. It is one of the 15 known phases of water. Also, there are many forms of ice such as, snowflakes, ice-pellets, hailstones, diamond dust, etc.

Ice is abundantly found on Earth, though it can be mechanically produced for different purposes. Ice can be made and stored through refrigeration, where water can be cooled below 00C to form ice. Commercial ice is widely used in winter recreation and in many sports such as ice-skating, ice-hockey, ice-fishing, etc. Also, ice plays an important role in climate and water cycle. 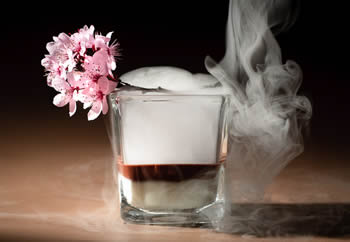 Dry ice, on the other hand, is frozen carbon dioxide. It is the solid form of the said gas. It is chemically made, though considered to be vastly found on Mars. It is high pressurized liquid carbon dioxide that displays sublimation i.e. it directly changes from solid to gaseous state with an intermediate liquid state. It leaves no watery residue and just disappears into the air.

Dry ice, also known as card ice, is primarily used as a cooling agent. It is colorless in nature and has a sour zesty smell. Also, it is low on electrical and thermal conductivity, and has non-flammable and acidic properties. The super-cool properties and the sublimation technique of dry ice, makes it a highly valuable cooling agent. Though, one should be extremely careful handling dry ice, because it is highly toxic and can result in frostbite.

Dry-ice offers a far greater cooling capacity than ice, as it maintains a high degree of efficient cooling for many hours. Though at times, it is imperative to use regular ice, dry ice can also suffice on the job to prolong the life of any given product. Another important factor is that while regular ice easily melts into water, dry ice lasts long and leaves no residue after usage at all.

Comparison between Ice and Dry Ice: