Difference between IPv4 and IPv6

Key Difference: IPv4 is the fourth version of IP and is widely employed. IPv6 version is a better and advanced version issued to deal with address exhaustion. IPv4 uses a 32-bit address format, while IPv6 uses a 128-bit format.

In order to understand Internet Protocol Version 4 (IPv4) and Internet Protocol Version 6 (IPv6), you must first understand what Internet Protocol is. According to Dictionary.com, internet protocol (IP) is “a code used to label packets of data sent across the internet, identifying both the sending and the receiving computers.” It is the principal communications protocol that is used to pass data in the form of network packets across the internet to other users. It is the primary protocol that establishes the Internet. The IP was the connectionless datagram service in the original Transmission Control Program, which was introduced by Vint Cerf and Bob Kahn in 1974.

In order to transfer data from one location to another, it must first know where the users are located. IP distinguishes these as IP addresses. The IP address is a number that describes where on the Internet your computer is located. Hence, the IP usually transfers data from one IP address to another. IP addresses are being used on almost every device that can connect to the internet including computers, laptops, smartphones, gaming consoles, etc. 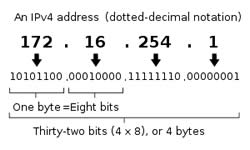 Now, IPv4 is just the fourth version of the internet protocol and is the most widely employed protocol format today. IPv4 is a connectionless protocol that is used for packet-switched Link Layer networks, such as Ethernet. IPv4 operates on a best effort delivery model, which basically means that it does not guarantee delivery of a data packet, nor does it assure proper sequencing or avoidance of duplicate delivery. These aspects are covered by higher transfer protocols such as Transmission Control Protocol (TCP). Hence, they are commonly referred to as TCP/IP. IPv4 development and definition is described in Internet Engineering Task Force’s (IETF) RFC 791 publication.

IPv4 uses a 32-bit (four-byte) address format, which approximately gives us 2^32 addresses or 4 billion addresses. The IPv4 is written in four 1 byte decimal numbers which are separated using periods or dots (ex: 170.25.458.1 is an IP address). With the unexpected growth of the internet, this number has resulted in IPv4 address exhaustion, where the last of the IP addresses were allocated. In order to deal with the exhaustion of Ipv4 address, a newer, better version is under works and is currently being deployed, IPv6.

Similar to the IPv4, the IPv6 is an Internet-layer protocol for packet-switched internetworking, which is used to transmit data packets across the internet. IPv6 is described in the IETF’s RFC 2460 publication. The IPv6 is also known as IPng or Internet Protocol next generation and is the latest version of the IP; it has been designed to replace the older IPv4 and to deal with the address exhaustion. The IPv6 went into development in the early 1990s when IETF realized that due to the internet boom, we may run of IP addresses.

In addition to providing more addresses, IPv6 is also more technologically advanced compared to IPv4 and also offers features such as (courtesy of Webopedia):