Difference between Joker and Riddler in Batman

Key difference:  The Joker and the Riddler are famous fictional characters of the comic book series Batman, published by DC Comics. In the series, these characters play fabulous scary roles, wherein the joker is a psychopathic killer; and the riddler, according to his name, is full of riddles, puzzles, and brain teasers. 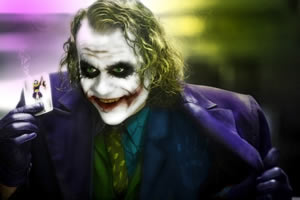 The Joker and the riddler are famous villains of the Batman series. The joker is a psychopathic killer, who is famous for his ferocious killing techniques and strategies, while the riddler is a character whose actions are true to his name. The riddler has lots of riddles and tricks up his sleeves in order to throw police off from his ulterior intentions.

The Joker is a ferocious character depicted by Heath Ledger in the film, ‘The Dark Knight’, the second film in Christopher Nolan's Batman trilogy. The character is also portrayed in David S. Goyer's interpretation of the comic book character by Jerry Robinson, Bill Finger and Bob Kane in 1940, as the archenemy of ‘the superhero Batman’. His awarded nicknames are, “The Clown Prince of Chaos or Crime,” “The Harlequin of Hate” and the “Ace of Knaves.” The Joker appears as a clown with green hair, white skin, red mouth, purple outfit, with no mask. Though being a joker, his looks do not resemble a real funny joker, his looks are more of a scary type. He is the real villain of the batman series, who uses any of the violent forms to kill anyone without mercy. He has no fear in doing these types of crime. He deliberately messes with people’s head and kills them; his actions are often directed at Batman. 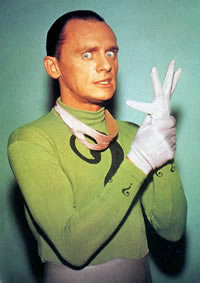 The Riddler is another fictional character of the comic book supervillain appearing in comic books published by DC Comics. He appears to be one of the enemies of Batman, created by writer Bill Finger and artist Dick Sprang; the character first appeared in Detective Comics. The Riddler was ranked and awarded as IGN's 59th Greatest Comic Book Villain of All Time in the year 2009. The character possesses a lot of tricky riddles, puzzles and word games. He always warns Batman and police in prior time by sending complex clues and riddles. With the self-conscious use of a gimmick or two, the Riddler's crimes are flamboyant and ostentatious. Typically, the character is portrayed as a smooth-talking yet quirky character, which is motivated by a neurotic compulsion to commit crimes based on riddles and puzzles. Like Joker, the Riddler always tests the Batman’s intellect. 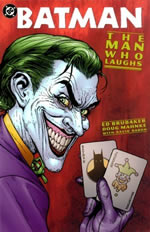 The Batman series is incomplete without these characters, the Joker is the real enemy of Batman, and intentionally wants to challenge Batman, whereas the Riddler is a robber who actually wants to fool and test Batman with his genius tricky riddles and puzzles. Another distinction between them is that the Joker is capable of both, the physical and mental pain; while the Riddler often participates in the cerebral type of matches. The Joker’s trademark is the Joker venom, and he often uses an assortment of weapons like a flower lapel that sprays substances, a gun, and a high-voltage hand buzzer. On The other hand, the Riddler applies his wit and intelligence to play around obstacles.

Both the characters are unique and defined well in the Batman series; they have their own appeal in the films and comics as well. The Joker is recognizable for his constant maniacal laughter, while the Riddler has a recurring OCD.

Comparison between Joker and Riddler: