Difference between Knitting and Weaving

Key Difference: Knitting is a method that is used to produce fabric, by turning yarn into cloth. Knitted fabric consists of consecutive rows of loops, called stitches. Each stitch is produced by pulling a new loop through and existing loop. In weaving, fabrics are produced by interlacing two different sets of yarn or threads horizontally or vertically. The way the threads are interlaced is known as the weave. Patterns and other designs can also be woven on the cloth.

Kitting and Weaving are two different methods that are used to turn yarn or wool into cloth. Various different types of fabrics are created using these types of processes. Though both are used to create fabrics, these two processes are completely different from each other, and a person, who is well versed with fabrics, can easily look at a material and say if it is a woven or knitted. For the rest of us, not so fabric savvy, these two terms can cause a whole lot of confusion.

Knitting is a method that is used to produce fabric, by turning yarn into cloth. The term ‘knitted’ is derived from the Old English ‘cnyttan’, meaning ‘to knot’. Knitted fabric consists of consecutive rows of loops, called stitches. Each stitch is produced by pulling a new loop through and existing loop. Stitches are held by a needle till a new loop passes through them. Knitting can be done by hand or a knitting machine. Different colored yarns and needles can be used to produce different colors, textures, weight and pattern of fabrics. The yarn in knitting follows a specific course of forming symmetric loops above and below the mean path of the yarn. These loops can easily be stretched into different directions, giving the knitted cloth its elastic properties. Hence knitting is used for fabrics that need to be stretched such as socks and hosiery. Clothes that are knitted are also more form-fitting due to the elasticity. The yarn used is knitting is thicker, compared to normal thread, making the garment bulkier and heavier.

Hand knitting, though no longer used for commercial purposes, have become a hobby, where hobbyists meet up either in person or online in order to share patterns, techniques and interests in knitting. In the US and UK, there are podcasts, websites and clubs just for knitting. 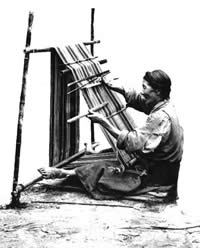 In weaving, fabrics are produced by interlacing two different sets of yarn or threads horizontally or vertically. The vertical threads are called as warp, while the horizontal treads are known as weft or filling. The method by which the threads are woven affects the characteristics of the cloth. Weaving is usually done on a loom, either machine or hand. The loom is used to hold the warp threads in place while weft threads are woven through them. The way the threads are interlaced is known as the weave. Patterns and other designs can also be woven on the cloth.

Weaving in a loom can be divided into three major parts: shedding, picking and beating. Shedding is where the ends are separated by raising or lowering heald frames to form a clear space where the pick can pass. Picking is where the weft can pass across the loom, and beating is where the weft is pushed up against the fell of the cloth by the reed. The variety of the garments produced during weaving depends on the colors of thread use and the sequence of the raising and lowering of warp threads. These days, computerized patterns are created which are then produced by the loom.

It is believed that weaving already existed during the Paleolithic era, while Neolithic textiles were first found in the pile drawings in Switzerland. By biblical times, weaving had already become popular as means of producing clothes. Early looms required two people to hold the shed and one person to pass the pick through the filling. Modern machine looms become popular during the Industrial Revolution and used wool as common thread. Woven threads are much more polished compared to knitted threads. They run mainly in one direction and hence are not elastic unless lycra, elastic or spandex fibers are woven into the fabric. Linen, denim, cotton twill, satin, chiffon, corduroy, tweed and canvas are all types of woven fabrics. Thread that is used in weaving is much thinner, producing lighter garments.