Difference between Kundan and Polki Jewelry 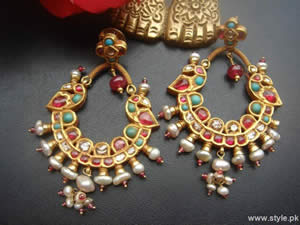 Kundan and Polki jewelry has its roots set in the ancient India, with maharajas and maharanis (kings and queens). The art of kundan and polki jewelry was brought to India by the Mughals and has been in practice since that era. Kundan and Polki jewelry falls under the process of Jadau, which is how the jewelry is actually made or the process of making that jewelry. It is now considered as the traditional jewelry of India. These jewelry styles are still highly popular and making such jewelry is still practiced in Indian states like Rajasthan and Gujarat. The pieces are considered as heavy and are popular during weddings and festivals.

Although, both jewelry styles are clubbed under Jadau, they differ from each other. The process of making Kundan and Polki Jewelry is a very long and intricate process which requires a team of people that are highly specialized in their own tasks. The process begins with beating gold in a very thin sheet, which acts as the base of the jewelry. The process also includes a byproduct of tree sap, known as lac or laakh. The gold sheet is filled with lac and stones or diamonds are set on the sheet. The sheet is then cut and molded around the stones or diamonds. In order to hold the stones in shape, 24 carat gold is melted and poured into the spaces between the stones. The objective is to create a holder or a cup for the stone or diamond to be set in using the thin sheet of gold. The separate stones can then be soldered together to create the final piece. The back of these pieces are decorated with engraving or enameling, a process called “meenakari”. 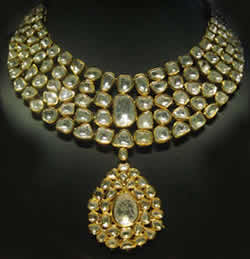 The term Kundan actually means pure gold, hence used for this form of jewelry. The gold that is used to set the stones is melted 24 carat gold, which is known as Kundan, resulting in the name of the jewelry. Polki jewelry has a small variation to Kundan. Although it uses the same process of setting the stone, the major difference is that Polki jewelry actually uses uncut or rose diamonds, instead of semi-precious stones. While Kundan uses glass stones, emeralds, sapphires and rubies, polki uses uncut diamonds to distinguish itself from other stones.

Comparison between Kundan and Polki Jewellery: