Difference between LAN and Wi-Fi

Key Difference: LAN stands for Local Area Network. It is a type of data communication network which is limited in geographic scope. In LAN, the devices communicate over a common communication channel (wired/wireless) allowing moderate data rates. Wi-Fi stands for "Wireless Fidelity." It allows computer and other devices to connect with the Internet in proximity of an access point. Wi-Fi belongs to the subcategory of the Wireless LANs. It is the name that is used to signify Wireless LAN product interoperability. 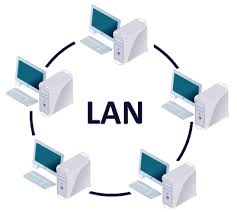 LAN stands for Local Area Network. It is a type of data communication network that connects computers within small areas like home, office, school, corporation, etc. using a network media. One of the important characteristics of a LAN environment is that all the stations on the network work as peers, which means that any station can initiate the process of data exchange. LAN works over a shared transmission medium like cabling. LAN consists of three important hardware elements –

LAN is typically owned by an organization that uses it. It works best for relatively short distances and at relatively high bit-per-second rates. LANs have been very popular due to the flexibility they provide. The reasonable costing also plays a major role in implementing the networks. There are three basic physical topologies of LAN – 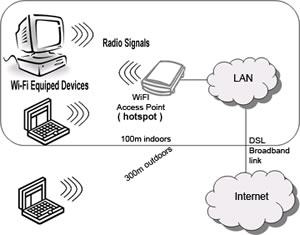 Wi-Fi stands for "Wireless Fidelity." It allows computer and other devices to connect with the Internet in proximity of an access point. It refers to the name of a brand which is licensed by the Wi-Fi Alliance. It denotes and describes the basic technology behind the wireless local area networks which are based on the IEEE 802.11 specifications. The technologies used by Wi-Fi are –

Wi-FI working – A Wi-Fi set includes one or more access points and clients. These access points broadcast the network name through packets. These packets are transmitted at a rate of 1 Mbit/s. The receiving client is this facility can communicate at the rate equivalent to at least 1Mbit/s. Transmission in a Wi-Fi takes place in the air, and therefore it possess the same properties as possessed by a non-switched Ethernet network. A wireless LAN is a type of LAN which uses Wi-Fi technology to connect the computers without using cables.

The difference between LAN and Wi-Fi is difficult to determine as WI-Fi falls in the category of wireless LAN.

Comparison between LAN and WIFI: