Difference between Lizard and Gecko

The animal kingdom is huge, after all it transverses the entire planet. However, due to this it can often get confusing to differentiate between two species that may look similar. One such example is lizards and gecko. These two types of creatures are very similar in nature, which is why it is so difficult to tell them apart. The main difficulty in telling them apart comes from the fact that geckos are basically specific types of lizards.

There are many different types of lizards out there, each different from the other. In fact, there are over 6,000 different species of lizards. Some of these, specifically 1,650 of these are classified as geckos. There are numerous factors that differentiate a gecko from other lizards.

Nearly all lizards are cold-blooded, have four legs, and a tail. However, while most lizards have dry and scaly skin, geckos tend to have a thin skin with small bumps on it. Additionally, most lizards tend to have clawed feet, while, geckos have a specialized toe pad that tends to stick to surfaces using natural physics. This enables them to climb smooth and vertical surfaces such as walls, windows, and even walk on ceilings. Geckos also tend to be double jointed which allows them to peel their feet from the surface they are stuck on.

Geckos are also able to pop off their tail when startled or in danger. This works as a distraction, as when the predator is distracted with the tail, the gecko can get away. Their tail often grows back. Sometimes, their tail heals while another one also grows, leading to a gecko having two or even three tails at a time. However, most other types of lizards are actually unable to regrow their tails. Unlike most other lizards, geckos do not have eyelids, but rather membranes which they must lick to keep them clean and moist. 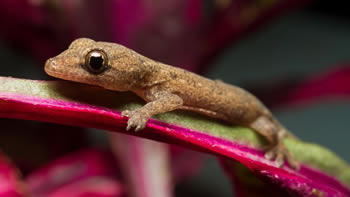 Another difference between lizards and geckos is the fact that unlike most other types of lizards, geckos are nocturnal, which means that they sleep during the day and come out at night to hunt. Geckos primarily hunt and eat various types of insects such as mosquitos, moths, cockroaches, etc. Whereas, the diet of lizards is varied depending on their species. It may include vegetables, fruits, insects, rodents, small mammals, etc. The Komodo Dragon, which is one of the largest lizards, has been known to stalk, kill and feed on humans on occasion.

Fun fact, the name gecko comes from the Malay word gekoq, which tries to imitate the sound that geckos make. Most other types of lizards do not actually make any sound.

Comparison between Lizard and Gecko: