Difference between Mandolin and Ukulele

Key Difference: Mandolin and Ukulele are two different string instruments. The main difference between the two is that ukuleles have four strings, whereas mandolins commonly have eight strings, and hence eight tuning pegs.

Mandolin and Ukulele are two different string instruments that at first glance might look quite similar. Yet, there are many differences between the two. Both are categorized as part of the lute family, which is also why they are mistaken to be the same.

The easiest way to differentiate between the two is that mandolins are bigger in size than ukuleles. However, this is a generalization and might not hold through at all times. Some of the smaller mandolins might be smaller than the larger ukuleles. At other times, they may even be of the same size.

Another difference, one that generally holds true is that ukuleles have four strings, whereas mandolins commonly have eight strings, and hence eight tuning pegs. Some mandolins may have ten or twelve strings. The ukulele’s stings are nylon, which means that they are softer and can be easily strummed by hand. The strings on the mandolin are metal strings which makes them harder to press and nearly impossible to strum by hand. Hence, mandolins are nearly always played with a pick. 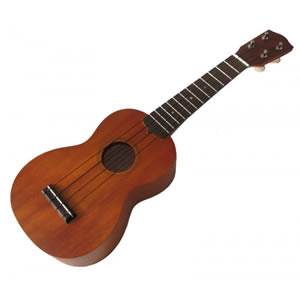 Additionally, instruments are tuned differently. The standard ukulele’s strings are tuned to GCEA, whereas a mandolin is tuned GDAE. The ukulele’s sound is closer to a guitar, whereas the sound of a mandolin is closer to a violin. The ukulele's tuning matches the highest sounding four strings on a guitar, which is why it can play numerous guitar chords without sounding out of place. The mandolin's tuning matches a violin, so someone who plays the violin could pretty easily play a scale on the mandolin. The sound of the ukulele is quite mellow due to the nylon strings, whereas the sound of the mandolins has a more biting timbre.

If it really is very difficult to decide between a mandolin and a ukulele, then opt for a Mandolele. A Mandolele is basically a mandolin that has only four strings rather than the typical eight. The benefit of this is that there is more range and variety in the sounds but the chords and the playing is the same as a ukulele.

Comparison between Mandolin and Ukulele: