Difference between Mantra, Yantra and Tantra

Key Difference: Mantra refers to a combination of words that is chanted in a particular order; it is believed that on chanting these mantras, the desired results can be achieved. Yantra refers to devices that are used for balancing of mind. Tantra defines rituals and meditation acts that can be used to get the freedom from uncontrollably recurring problems.

Yantra, mantra and tantra are all Sanskrit words and each defines a different element. The Hinduism and Buddhism have been associated with these words. They are very frequently used in Indian sciences, mythology, religion and occult practices. They are used in context to balance of mind and with the spiritual powers. The energy of the universe is supposed to be the driving force of every action performed and these elements focus in using this energy through different mediums. Due to various interpretations, it is very difficult to explain the differences. However, the basic differences can still be observed. 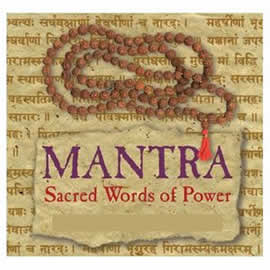 Mantra is a Sanskrit word meaning manas - mind, consciousness, soul + tra, trayate - to free. It is a Sanskrit sound, syllable, word or groups of words that is considered capable of creating transformations. However, the task that a mantra is capable of performing has been interpreted differently in different regions. Hindu Mantra also evolved into writing forms and later with the advent of Buddhism in China, the China also achieved cultural unity by writing it with flexible characters. Mantra represents divinities or cosmic powers and is known to create huge influences through the sound vibrations.

The ‘Gayatri Mantra’ is regarded as one of them most important Sanskrit Mantras. It is believed that chanting this Mantra can lead to immense happiness. This Mantra is composed of a meter that consists 24 syllables.

Yantra in Sanskrit means ‘instrument’. Thus it can refer to a symbol, process, machinery or anything that can be described with characteristics like structure and organization. 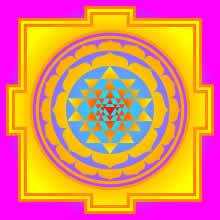 In the west, it has been widely popular as the symbols or geometric figures. These symbols are regarded as devices that can be used to balance the mind and also helps in focusing on the spiritual concepts. According to Wikipedia, yantra can be described as:-Yantra is a Sanskrit word that is derived from the root yam meaning to control or subdue or "to restrain, curb, check". Meanings for the noun derived from this root include:

Yantra uses the geometric patters that can comprise squares, circles, triangles and floral patterns. All these geometric patters are supposed to represent some power. There are various symbols that are used in yantras as- ‘Sri yantra symbol’, it is a symbol of the entire cosmos and it serves to remind the practitioner of the non-difference between a subject and object. A person when focuses on Yantra, it is believed that a particular shape of Yantra can transmit a specific energy pattern. 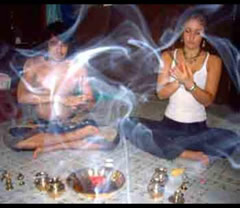 The word "tantra" is derived from Sanscrit word tantra literally meaning 'loom, groundwork, doctrine', from tan 'stretch'. Thus, the basic concept of Tantra means to expand. It is regarded as a cosmic weave that is composed of several energies. Human beings form the important part of this weave. Tantra is often associated with the black magic but the followers of Tantra believe that it as the application of cosmic science. They believe that it is a device through which knowledge is spread. The Tantra followers or preachers worship Lord Shiva and goddess Shakti. In Hinduism, the ‘Atharva Veda’ is considered to be one of the prime scriptures related to Tantra. It refers to powerful spiritual acts that are used in order to let ourselves free from the problems and also for the enlightenment of the soul. The sacred Hindu and Buddhist scriptures known as ‘Tantras’ are supposed to provide detailed instructions on many Tantra related topics, including spiritual knowledge, Cosmic power, technology, and science.

Tantra is described as a technique to expand the consciousness. Mantra on the other hand focuses on the inner sound. The utterance of Mantras is regarded as very powerful and is supposed to create huge impact. Yantra refers to creation of a certain state by using the medium of symbols. In short they can be equated with mantra =to energy, tantra=to plan, yantra =to object,