Difference between Mermaid and Siren

Key difference: Mermaid and Siren are two mythical female creature known for their beauty and luring appearance. A "Mermaid" is a half-woman half-fish creature that lives in seas, while a Siren is a half-woman half-bird creature. Both have been a fascination in popular fiction literature for their beauty and alluring appearances.

Mermaid and Siren stories have been heard and told through the 16th century and onwards. The beauty of these mythical creatures made them an indispensable part of popular folklore and fiction that still has influences on audiences today. Their habitat has often been shown as oceans and islands with their mysterious appearances as awfulized characters. Fairy tales and folk tales have always had these creatures interacting with other characters with the fascination that is dear to children as well as adults. The uniquely odd features of these creatures make them always "wanted to hear about" in popular stories and after the arrival of cinema, they were explored beautifully on motion picture screens. (See the difference between fairy tales and folk tales). Children are often seen asking elders - "are mermaids real" and "are sirens real?" Often, a mermaid and siren are considered to be the same and hence people remain confused between due to their similarities because they have influenced us in the same way fairy tales and folk tales did. This article might give a clear difference between their existence and features. 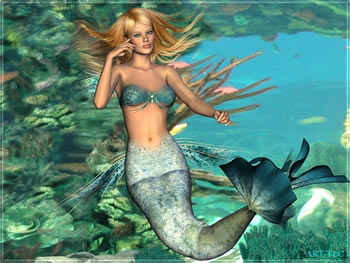 A 'mermaid' was a half human and half fish type of creature. Mermaids stories appeared in the folklore of many cultures worldwide, including the Near East, Europe, Africa, and Asia. Mermaids had a torso of a fish and the upper body of a human being. They were very beautiful, and had extreme attractive looks and facial features, as opposed to one’s normal presumption that their scales would make them look repulsive. They used to attract, hypnotize and seduce the sea sailors or navigators with their shrill and fascinating voices. These were humble and kind in nature, hence mermaids were always helpful towards humankind. Many mermaid videos are often faked on the internet as real videos which we often see going viral.

A 'siren' was a half woman and half bird type of creature, which belonged to Greek mythology (See the difference between myth and mythology). They were nymphs who lived on islands surrounded by cliffs. Sirens were believed to combine women and birds in various ways. Like Mermaids, even sirens used to attract and seduce the sailors with their shrill voices by enchanting and singing different tunes. But, Sirens had wicked and evil intentions behind their motives, They used to drown the sailors into the sea. This proves that they were harmful and dangerous in nature. 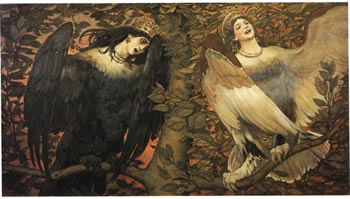 Both these creatures had their mythical stories, mermaid and siren both were known for their beauties and different behavioral features. Note that they were not holy ghosts or holy spirits though they may be depicted that way (See the difference between a holy ghost and the holy spirit). They were the most attractive and seducing woman, hence men’s often used to get attracted towards them. These had their typical behaviors, like mermaids had golden long hairs, and often used to see themselves in mirrors or see reflections; they always used to play with their hairs. On the other hand, sirens were known for singing and seducing abilities, which attracted the males. Hence, sirens were considered to be more dangerous with evil wicked intentions than mermaids, who were gentle and kind towards humankind. Now that the world has advanced with the culture of increased scientific questioning people clearly distinguish between reality and myths & folk tales (See the difference between myths and folk tales), though both of them are narrated and heard with interest and entertainment.

Comparison between Mermaid and Siren:

Also see: The difference between soul and spirit

who lives in a pineapple under the sea ?

I thought that sirens were mermaids, just meaner. I heard that they would attract sailors by their singing voice, but they wouldn't drown them, they'd eat them. Both ways are pretty creepy.

The grammar I've been seeing in this article and the comment section hurts my soul. However the article was slightly helpful.

what are you an English major. Perhaos English is not the writers first language. Did you think of that?

I am doing a paper on how the siren has evolved over time. Im trying to figure out where the confusion between the bird and mermaid occured so this was super helpful. But you said there were an article or a link giving more specific details to the comparison, unfortunately I cant find it.

actually serins are not only a Greek myth creature ...they're are the daughters of Lilith the god of darkness in Sumerian and Syrians old myth ... before the Greek were existed actually the word(Dark) means (lil) in arabic which comes from (lil-ith)or(lily) the god of darkness.... amazing isn't it ....

I'm only twelve so I don't know much but in most kids movies sirens are basically evil mermaids that look really pretty to the people that they enchant but really if you have ever seen iceage 3 they are not pretty at all even though in iceage 3 they look more like fish I still think that sirens and mermaids are very different. They have probably made the sirens in kids movies look really fake so the children don't get scared

The true story of Mermaids is that they have green blood and feeds on Humans kust like Sirens do. So, Meemaids and Sirens have the same nature to humankind but their bodies are different