Microevolution and macroevolution are two terms that you not only come across in the field of science but it is also very much a part of a person’s everyday life. The process of evolution is something that one encounter’s daily, even if the process is not visible. Evolution is the process by which something changes from one stage to the other, especially a more advanced or mature stage. 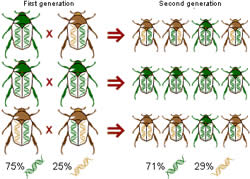 Microevolution is the change that occurs in the gene frequency of a population over a period of time. This change is related to four different processes that a living organism encounters: mutation, selection (natural and artificial), gene flow, and genetic drift. The branch of science that deals with the study of microevolution is known as ‘population genetics.’ Microevolution is the small changes that occur in a living organism that allows it to adapt and change according to its surroundings and circumstances.

‘Botanical Gazette’ in 1909, addressing what he called the "mystery" of how formlessness gives rise to form. The description used by Leavitt is now known as developmental biology. The usage of the term was drastically changed when the word was used in accordance with ‘macroevolution’ by Russian Entomologist, Yuri Filipchenko in 1927 in his German language work, "Variabilität und Variation". The term was later carried into the English usage by Theodosius Dobzhansky in his 1937 book Genetics and the Origin of Species.

Microevolution is observable over short periods of time and can be affected by changing of the DNA sequence of a cell's genome. Changes can be caused by radiation, viruses, transposons and mutagenic chemicals, as well as errors that occur during meiosis or DNA replication. These changes or errors in a cell are known as mutation, which help the cell adapt in hostile situations. Error rates are usually very low due to the "proofreading" ability of DNA polymerases. Other factors that can affect microevolution are the Darwin’s theory of natural selection or artificial selection, which allows organisms to adapt traits that are more likely to help it survive. An example of microevolution includes crop pests to become immune to pesticides after a prolonged use.

In contrary to microevolution, macroevolution deals with evolution on a larger and grander scale. It refers to change that occurs at or above the level of species or abrupt transformations from one biologic system to another. Paleontology, evolutionary developmental biology, comparative genomics and genomic phylostratigraphy help contribute evidence in order to prove the existence of microevolution. Microevolution is believed to take hundreds or thousands of years to occur.

Macroevolution is not easy to see as there are not first-hand accounts of such mutations on a grander scale, however evidence from bones, DNA and fossils have given us enough proof in order to create an exact timeline to place the events in history. Similar factors that affect microevolution such as mutation, migration, genetic drift, and natural selection, also affect macroevolution and produce major evolutionary changes when given time. Visible patterns in macroevolution include stasis (remain unchanged for long period of time, like trees), Character change (lineages can change fast or slow depending on the surroundings), Lineage-splitting (lineages can split into two different species, such as various plants and animals that belong to the same family), and extinction (where the species officially dies out when it cannot adapt).

The term ‘macroevolution’ was first coined by Yuri Filipchenko and the meaning of the two words microevolution and macroevolution has been revised several times before receiving its current definition. The term macroevolution fell in limited disfavor when it was taken over by geneticist Richard Goldschmidt and the paleontologist Otto Schindewolf to describe their orthogenetic theories. The practical definition of the term describes the changes that occur on geological time scales. Example of macroevolution includes the Cambrian Explosion, changes in biodiversity through time, genomic evolution, mass extinctions, etc.  The best possible way to explain macroevolution would be the evolution of humans from primates.