Difference between Milk and Buttermilk

Key Difference: Milk is a whitish liquid that is produced by the mammary glands of mammals. It is also acquired from a variety of seeds. Traditional buttermilk is the substance that is leftover substance after butter is churned out of cream. More commonly buttermilk is now used to refer to these fermented beverages.

Milk and buttermilk are two dairy products that are also beverages. Milk and buttermilk are different from each other in the sense that milk is produced by the mammary glands in a mammal. Buttermilk is the milk that is left when butter is churned out of cream. Both of these are high in health benefits are should be incorporated into the daily diets. 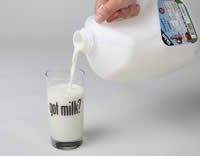 As an agricultural product, milk is produced in great quantities by cows, buffalos, camels, goats, sheep, etc in order for consumption by humans as food.  India is the largest producer of milk, but it neither imports milk nor exports milk. New Zealand, European Union, Australia and the US are the largest exporters of milk, while China and Russia are the largest importers. Milk is encourages by nutritionists to be continued even after the stage of infancy has passed. Milk is also used to create a variety of dairy products such as cream, butter, yogurt, kefir, ice cream, cheese, etc. Humans are the only creatures in the world that consume milk past infancy. Other different types of milk include whitish substance that is extracted from seeds such as  soy milk, rice milk, almond milk, and coconut milk.

Milk is also used in a variety of recipes such as cakes, cookies, bread, soups, pasta sauce, etc. Milk offers a variety of health benefits including high in probiotics that helps strengthen the immune system and fight diseases. Milk is also the primary source of calcium, phosphorous, magnesium and protein that helps strengthen bones and teeth. Milk can also help reduce blood pressure, cardiovascular diseases, type 2 diabetes and cancer. Contrary to popular belief that milk helps gain weight, milk in moderate amounts can help reduce weight according to studies. 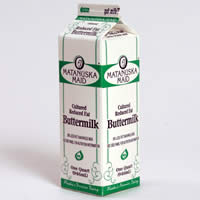 Buttermilk refers to two different forms of beverages: traditional and cultured. Traditional buttermilk is the substance that is leftover substance after butter is churned out of cream. The cultured buttermilk is artificial fermenting of milk causing it to thicken. More commonly buttermilk is now used to refer to these fermented beverages. These beverages are commonly found in warm climates, such as Middle East, Pakistan, India and in cold climates such as Germany, Poland, Scandinavia and the Netherlands.

This drink is created from cow’s milk and is fermented with lactic acid bacteria, which causes the milk to thicken and acquire a sour, acidic taste. Two types of bacteria that are used for fermentation include Streptococcus lactis or Lactobacillus bulgaricus. The bacteria ferments the lactose in the milk, producing lactic acid. The traditional buttermilk has a less acidic and tangy taste compared to the cultured buttermilk. In India, the term buttermilk refers to the liquid that is left over after extracting butter from churned yogurt. In addition to being consumed raw, buttermilk is also used in various recipes for biscuits, pancakes and cornbread. It can also be used as a substitute for milk and yogurt.

Buttermilk offers various health benefits such as it is high in probiotics (also known as good bacteria). The probiotics help strengthen the immune system, as well as break down the lactose into lactic acid. Buttermilk is good for the gastrointestinal system. It is also known to prevent vaginal and urinary tract infections. Buttermilk, similar to milk has offers a dose of calcium, along with iboflavin, vitamin B12, zinc and protein. Buttermilk is also advisable for consumption by lactose intolerant people, as the beverage is low in lactose due to the bacteria that turns lactose into lactic acid. Buttermilk is also advisable when dieting as it has lower calories compared to milk, but offers almost the same health benefits.