Difference between Monkey and Gorilla Testing

Key Difference: The objective of Monkey Testing is to randomly try to crash the system and to ensure that it does not. In Gorilla Testing, one module of the program is tested over and over again to ensure that it is working properly and that there are no bugs in that module. 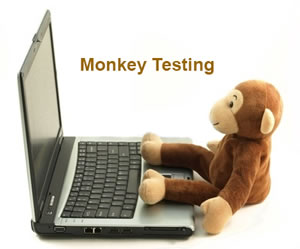 Monkey and Gorilla Testing are two different types of testing conducted on a piece of software before it can be released in the market. A program can have a million bugs in the system between the time of its initial programming and the time of its release. These bugs need to be sought out and fixed; this is where Monkey and Gorilla Testing come in.

Monkey Testing is a random test that is conducted without any planning or preparation. It can either be conducted by a developer, tester, or an automated tool. In fact, the developer or tester need not know anything about the software. The objective of the test is to literally try to crash the system and to ensure that it does not. For this purpose, the test can include random tests such as literally typing random strings into text boxes to see how the system would handle the error.

Gorilla Testing differs from monkey testing; it is neither random nor conducted without planning or preparation. In Gorilla Testing, one module of the program is tested over and over again to ensure that it is working properly and that there are no bugs in that module. The module can be tested over a hundred times, and with the same process. Hence, the testing process includes the tester running the same code over and over again. 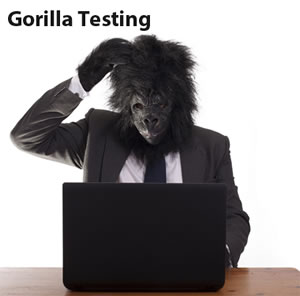 The advantage of Monkey Testing is that it allows the tester to find out how the program will work in the real world when an incorrect set of stings in inputted into the program. This is quite likely to happen in the real world, as the user will probably not be completely familiar with the program.

The advantage of Gorilla Testing, on the other hand, is that at the end of it the program will be thoroughly checked, module by module. Also, it ensures that the program will not started to lag or work incorrectly after some time, like the first hundred inputs. Due to this, a program is usually test with both Monkey and Gorilla Testing, in addition to other strict and rigorous testing processes.

Comparison between Monkey and Gorilla Testing: