Difference between Moron and Idiot 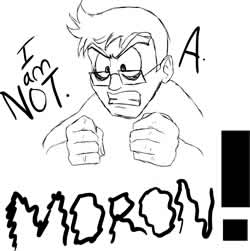 Moron and idiot are basically synonyms of each other used to express a stupidity of a person. In the psychological process, they basically referred to a person who is mildly mentally handicapped or mentally deficient.

In psychology, moron is used for the person who is mildly mentally handicapped. The IQ of morons is between 51 and 70. The term was derived by Psychologist Henry H. Goddard, in 1910. It basically originated from the Ancient Greek word moros, meaning "dull" or "foolish". In the older times, it was observed that a moron is a stupid person with the mental age of between 7 to 12 years. However, in modern times, it is just refer to a person whom one finds doing stupid things and the activities that are very irritating. A person who is notably stupid and frustrating or lacking in good judgment is a moron. 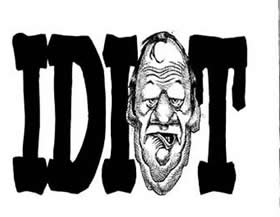 In psychology, an idiot is a person who is mentally deficient. Idiot is also known as a dolt and dullard. The term was basically derived from the Greek word idiots, meaning “person lacking from professional skill”. In Latin, the word was derived by idiota, meaning “ordinary person” and headed the late Latin meaning “uneducated or ignorant”. In general terms, an idiot is a person who is very foolish and senseless. They just try to be very intelligent, or sometimes behave in such a way that everyone get irritated because of them. Over-smartness also sometimes makes a person an idiot.

Comparison between Moron and Idiot: