Difference between Naan and Paratha

Key difference: Naan is a leavened, oven-baked flatbread, made with maida. Paratha is a fried Indian flat-bread, made with atta and usually stuffed with various indregients. 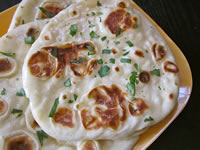 Both naan and paratha are types of Indian bread. They both originated from South Asia and are quickly gaining popularity in various parts of the world. This is mainly due to the vast amount of immigration which has brought Indian food to the rest of the world.

Naan is a leavened flatbread. It is made out of maida, which is refined wheat flour, and is baked in a tandoor, a type of oven. Naan, originally, meant any type of bread, but the term now refers to a specific flatbread.

Naan is made out white flour and is usually leavened with yeast. Sometimes, baking powder is used as a substitute for yeast. Milk or yoghurt may also be added to give the naan more volume and thickness. The dough is kneaded and kept aside to rise for a few hours. It is then shaped into oblong or triangular ear-shaped pieces, which is cooked in a tandoor by sticking it to the side of the clay oven. This is then scooped out with a metal rod with a hook on the end.

The naan is typically served hot and brushed with ghee or butter. Some types of naan may also be stuffed with ingredients, including kheema (mince meat), potatoes, paneer (cottage cheese), cheese, raisins or spices. 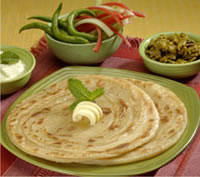 A paratha, which is also known as parantha, is a type of unleavened flat bread. It is made with atta, whole wheat flour. It is usually stuffed with vegetables, especially boiled potatoes, radish or cauliflower or paneer. The dough is kneaded, stuffed and then shaped into a round, square, triangular or hexagonal shape. The paratha is then fried in ghee, butter or cooking oil on a tawa or tava (an Indian fry pan).

A paratha is usually served with a blob of butter or ghee on top. It can be eaten as is with tea, pickle and yoghurt or with spicy meat and vegetable curries. Paratha are quite popular in North India and famously eaten as breakfast. They are also sometimes eaten as a dessert, with caramelized sugar on top. Parathas are also popular in Singapore, Burma, and Malaysia.

A comparison of Naan and Paratha: