Difference between Nail Polish and Gel

Key difference: A nail polish is a varnish used to color and shine the nails, and a gel is a gelatinous substance used for cosmetic purposes.

Nail polish was primarily used in the early 19th and 20th century, people used to pursue a polished rather than painted look by massaging the tinted powders and creams into their nails, then buffing them shiny.

They are cosmetic nail color polishes, which are used to color the nails with different varieties of color. They give a tidy and presentable look to the nails. It is said observed that, they provide protection to the nails from the fungal infection, and act as a covering coat on the nails. Especially, women and girls use nail polishes, as it adds a trend and fashion spot to them.

Gels are basically, jellylike substance containing a cosmetic, medicinal, or other preoperational use. They are semisolid colloidal suspension, in which the solids are dispersed in liquids. 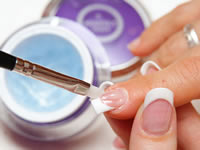 Gel nails are new and more natural looking alternative to acrylic nail extensions. They provide the same strength and natural look as acrylic nails, but without odor, nail damage and common acrylic overlays. They are applied in order to maintain the consistency of nails. They provide protection to nails from the external dust and fine particles. They also add glow and shiny appearance to the nails. They are available in choices of natural colors to enhance the natural look of the nail bed.

The only disadvantage of the gel nail polish is that, once it's been on the nails for 2/3 weeks, the nails will start growing out of the polish. Hence, the nails end up with the lovely nail coats, then a line of the natural nails grow under it. Also, if they get chipped out, then they end up by damaging the nail to the extreme. Most of the natural nail coatings come off along with the gel polish.

Comparison between Nail polish and Gel: