Difference between Nebula and Supernova

Key Difference: Nebula is a cloud in deep space consisting of gas or dirt/dust (e.g. cloud formed after a star explodes). Supernova is the last stage of the life of a star and is a very huge explosion from a dead star.

Nebula and Supernova are the two concepts that are related with stars, and they are interrelated with each other. Nebula is a cloud in deep space consisting of gas or dirt/dust. The word Nebula has been derived from the Latin word, meaning “cloud”. Nebula is also called as nebulae. Dust and gas clouds are called nebula. In the earlier time, galaxies were also called nebula by astronomers because of their fuzzy appearance. However, nowadays the word nebula is referred for extended objects consisting mostly of gas and dust. It comes in many shapes and sizes and forms in many different ways. 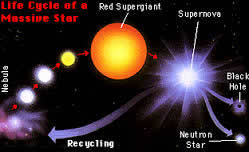 Supernova, in a simple sentence, is the last stage of the life of a star. It is basically a procedure when a star is completely destroyed because they are not able to sustain its gravity anymore. It can be a long process to be completed because it needs a large amount of energy, and there's a very huge explosion from a dead star. Stars contain more than 1.4 times the mass of the Sun. Thus, these stars will leave the main sequence and go through several phases which results in carbon and oxygen as byproducts.

A nebula is a cloud of stellar material ejected by a star exploding as a supernova.

Comparison between Nebula and Supernova:

thank u for ur information