Difference between Nova and Supernova 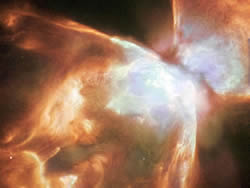 A nova basically is a fusion reaction of a white dwarf star, and is usually a small explosion. The word nova was derived from the Latin word, meaning “all new stars”. A nova is a nuclear fusion on the surface that brightens the star for a while. The gas is heated as it is compressed, and the hydrogen may go up in flames in nuclear reactions that brighten the surface and blow excess gas outward. This type of explosion is called a nova. 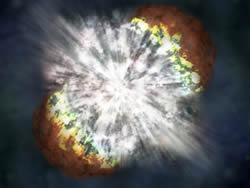 A supernova is brighter than a nova. Supernova, in a simple sentence, is the last stage of the life of a star. It is basically a procedure when a star is completely destroyed because it is not able to sustain its gravity anymore. When a supernova goes up in flames a black hole is created.

Modern astronomer, UW-Madison Space Place Director Jim Lattis said that ‘there are different processes that lead to these explosions, but the upshot is that the star is ripped apart and becomes billions of times brighter than it was before.’ It has been observed from Earth that sometimes a nearly unnoticeable star becomes one of the brightest objects in the sky. They are the supernovas.

Comparison between Nova and Supernova: