Difference between Octopus and Squid

Key Difference: Octopus and squid, both are aquatic animals belonging to the group of cephalopods. Cephalopod means feet around the head. They both share many common features. However, they also differ in many attributes like habitat, anatomy, lifespan, etc. 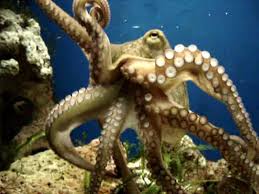 Octopus and squid, both are aquatic animals belonging to the group of cephalopods. Cephalopod means feet around the head. The body of these creatures consists of the head, the trunk and the neck connecting head with the trunk.

Octopuses belong to the family Octopodidae and group Octopoda. They can be commonly found in almost all seas. An octopus contains a large head with a strong beak and it has a small oval body. This body contains an internal shell but the fins are absent. An octopus is often recognized by its eight long slender arms.

They prefer to stay alone. It likes to hide in its den which it sometimes digs to occupy. There are many species of octopus and one can find the difference in arm’s  length in different species. 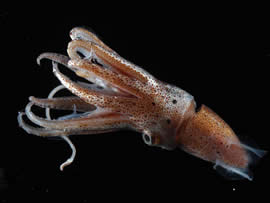 There are many types of squids. They belong to the group Decapoda.  They have a long and tapered body. They also possess a  fin which is present on each side of its body. It has 8 muscular arms and 2 long tentacles. Both arms and tentacles bear suckers. They are widely distributed but they usually occur along shores, on high seas, and also from surface to even great depths.

Blood of both animals is blue in color due to the copper content which is found in oxygen carrying molecule. They also bear hard parrot type beaks which assists them in killing their prey. They both are generally not dangerous for humans. However, the blue ringed octopus produces enough poison which is capable of paralyzing a human being.

They differ in many aspects. Generally octopuses live in dens, whereas squids are commonly found in open seas. Octopus makes use of its eight sucker lined arms to get hold of its prey. On the other hand, squids use their eight arms lined with suckers and two tentacles to reach and capture their prey. They also differ in their diet. Octopuses eat bottom dwelling crustaceans, whereas, squids eat fishes and shrimps. Some scavenger squids may also be found in deep water.

Comparison between Octopus and Squid: