A mouse is hardware that is required when trying to navigate on a desktop PC. However, many people these days also use a mouse on their laptops as it makes navigation easier. A mouse is a pointing device that works by detecting the movement on it and translates it to the device that it is connected to. The most common features of a mouse include two buttons and a scroll wheel which also acts as a third button. The mouse is often placed under one palm of the user, who then moves it to move the pointer that is reflected on the computer screen, while pressing the buttons on the mouse causes the pointer on the screen to click and perform some action. Optical Mouse and Laser Mouse are two different types of mouse that are used in computer.

The original mouse was powered by a heavy rubber ball, which would connect to a small wheel inside the mouse. The user would move the mouse on the ball and the trackball would reflect the movement on the screen. However, with the release of the optical mouse, the mechanical mouse has become obsolete, with only few people using it.

The optical computer mouse, also known as optic mouse, is a pointing device that uses light-emitting diode (LED) and photodiodes to detect movement and reflects it back on the screen. The optical mouse was invented in 1980 by two independent inventors and was available in two different varieties. One variety used an infrared LED and a four-quadrant infrared sensor, while the other one used a 16-pixel visible-light image sensor with integrated motion detection on the same chip. However, the modern mice use an optoelectronic sensor and takes successive images on the surface that it operates on. As the technology became cheaper it was much convenient to embed the mice with powerful special-purpose image-processing chips. The modern optical mouse can capture one thousand images or more per second. The processing of these images is done by mathematic cross correlation. 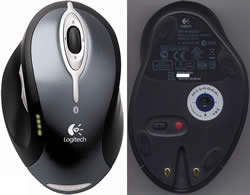 The laser mouse uses an infrared laser diode to illuminate the surface beneath the sensor. The laser mouse was available as early as 1998, when Sun Microsystems provided one with their Sun SPARCstation servers and workstations. However, they were not commercially available until 2004 and the first mouse was launched by Logitech, in partnership with Agilent Technologies. The laser that replaced the LED significantly increases the resolution of the image that it takes. The mouse also enables around 20 times more surface tracking power. There are various different types of laser mice including glass laser mice (which can work with ease on glass and transparent surfaces) and “dark field” mice (which can work on glass and glossy surfaces).