Difference between Passover and Eucharist

Key Difference: Passover (Pesach) is one of the three major Jewish festivals. It commemorates the liberation of the Israelites from slavery in ancient Egypt (based on the Old Testament book of Exodus).  Eucharist is a Christian rite which is performed as an expression of faith in Jesus. It is performed according to the Jesus instructions at the Last Supper (based on the books of the New Testament). It is also known as the ‘Holy Communion’. 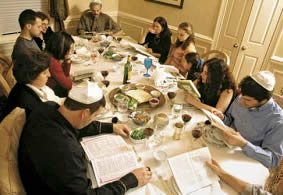 Passover (Pesach in Hebrew) is a famous festival of Jewish people. It celebrates the deliverance of the Jewish people from slavery in Egypt. This story is based on the book of Exodus, Chapter 12 in the Hebrew Bible. The celebrations of Passover lasts for seven to eight days. It is celebrated for seven days in Israel and eight in Diaspora. It is observed in the Hebrew month of Nissan.

The most important part of this festival is the seder, which is a festive spring meal full of symbolism. Traditionally it includes shank bone symbolizing strong hand, roasted egg symbolizing fertility, better herb symbolizing bitterness of slavery, parsley symbol of spring and charoset symbolizing the mortar with which the ancestors of Jews laid bricks for Pharaoh. During the seder meal, the story of ten plagues is read out to remember the liberation and suffering of the Egyptians. .

Passover is the pre-eminent Jewish home holiday and Jews have been celebrating this festival since 1300BC. Various preparations are done to celebrate the festival. Houses are cleaned thoroughly and are made sure that no trace of chametz or leaven remains at home. A Jew is prohibited to eat chametz or derive any benefit from it during the Passover. 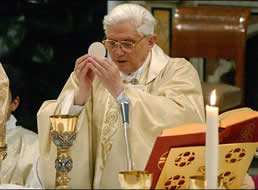 Eucharist or Holy Communion is a Christian rite which is observed as an expression of faith in Jesus. This term is a Greek term which means “thanksgiving”. Eucharist is also known as the Holy offering, the Holy Mysteries or the Mystic Supper. It is performed on the basis of Jesus instructions at the Last Supper. These instructions are based on the books of the New Testament.

This sacrament is accepted by almost all Christians. In some of the churches, the person playing a lead role in the ceremony is known as the celebrant. It is basically a reenactment of the Last supper, which defines the final meal taken by Christ with his disciples before his arrest and crucifixion. It is generally marked by a memorial action of eating bread and drinking wine.

Meals of Passover and Eucharist are both meals of remembrance. They primarily differ in their commemoration aspect. Passover is a tribute to the liberation of the Israelites from captivity in Egypt. On the other hand, Eucharist refers the liberation in a broader manner; indicating the liberty of mankind from sin.

Comparison between Passover and Eucharist: