Difference between Pigeon and Dove

Key Difference: Pigeons and doves both belong to the Columbidae Family, which includes around 310 species of birds. The term ‘pigeons’ and ‘doves’ are often used interchangeably. In ornithological practice, the birds that are larger in size are referred to as pigeons, while the smaller ones are referred to as doves. Pigeons and doves actually do have much in common with each other, as pigeon is just another type of dove.

People are very familiar with pigeons and doves due to their availability in almost every country. Doves are often believed to the cute, soft looking birds, while pigeons are considered to be a nuisance. Pigeons and doves actually do have much in common with each other, as pigeon is just another type of dove. Confused? Well, to clarify, people often assume that doves are white that make soft cooing sounds and are peaceful creatures, while pigeons are bluish, grey with black stripes and make loud cooing noises. In technicality, the person would be right. However, pigeons are scientifically known as Rock Doves or City Doves. 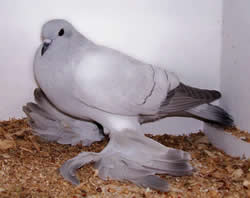 Pigeons and doves both belong to the Columbidae Family, which includes around 310 species of birds. The term ‘pigeons’ and ‘doves’ are often used interchangeably. In ornithological practice, the birds that are larger in size are referred to as pigeons, while the smaller ones are referred to as doves. The most common species that is found in almost all cities is known as the Feral Rock Pigeon. Other names for this particular species include city doves, city pigeons and street pigeons. Pigeons and doves can be found in almost all habitats and regions except for the places that have extreme heat or extreme cold.

Pigeons and doves vary in sizes based on the different species, while some can even grow to the size of a turkey. The largest species is known as the Crowned Pigeon of New Guinea, which is approximately the size of turkeys and can weigh between 2-4 kgs. The smallest species is the New World Ground-Dove which is approximately the size of a hummingbird and can weight around 22 grams. The other species range between these two. Pigeons and doves are stout-bodied birds that have short necks, and short, slender bills with fleshy ceres. They have short legs and small heads on big compact bodies. They are famous for their head bobbing and cooing. The color of their plumage also changes depending on the type of species. Many doves and pigeons sport bright plumages. 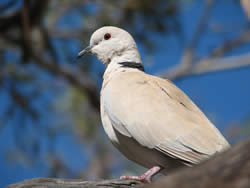 The pigeons have been known to be intelligent creatures and have also been included in many comparative psychology experiments. They are also gentle and mild creatures that are easy to domesticate. The doves and pigeons are also often found in large flocks that may have anywhere from 50-500 birds. The male pigeons and doves often puff their feathers and then strut in front of the female they are trying to impress. In addition to following the female, the male also emits small repetitive sounds and often bows and turns as he comes closer. Once the female allows the male into her proximity, the male mounts the female and mates with her. Pigeons and doves often mate for life. At one time a pair of pigeons/doves may birth one-two eggs. The fledging period of a nestling lasts about 30 days before the nestling can fly on its own.

Pigeons and doves have had a rich history and due to their gentle nature, they have been easily domesticated for a variety of purposes. During the olden times, when technologies such as phones, internets and telegrams did not exist, messenger pigeons were used to send notes and letters to one another. Doves have also been associated with peace and spirituality due to their white color. White doves are also considered as good luck when they are released in during ceremonies. Pigeons and doves have also been used as sacrifice in many religions, where the people could not afford expensive animal. The Dove is also associated with the Holy Spirit in Christianity. Doves and pigeons are also respected and favored in Islam. They are also popularly used as food.

i have some fancy pigeon. from my childhood i rear pigeon. some articles have been written from my side which are available in internet (Dr M Ashraful Kabir, pigeon researcher of Bangladesh). please read my articles and inform all.

This is amazing. May God improve your strength in Jesus Christ Name. Amen.