Difference between Pistol and Rifle

Key difference: Pistol is a short barrel hand held gun. Rifle is a long barrel gun shot off the shoulder. 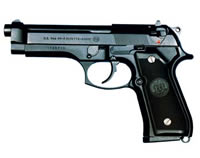 Both pistols and rifles are types of gun which shoot projectiles called bullets. A gun is a projectile weapon that has a hollow, tubular barrel, which is closed off at one end. This barrel is used to directing the bullet and firing it in a flat trajectory.

A pistol is a handgun, which means that it is meant to be held and shot from the hand. They are usually smaller in size than other types of guns. They are easier to carry around as they weigh less and can be easily concealed on the body. They were developed by Stevens Maxim in 1885. They are considered to be a more advanced technology than revolvers, as pistols can fire shot after shot. This is mainly due to the fact that they have a magazine that can hold up to nine bullets at a time.

A pistol uses a slight pressure fire the bullet and has a safety lever mechanism which avoids accidental firing. After a shot has been fired, the pistol experiences a recoil action, which inserts the next bullet into the shooting chamber. The recoil action of the pistol may change the direction of the bullet, which means that the shooter needs good aim to counter act it. However, very little effort is required to fire a pistol. Pistols can be used for a range of 45-50 meters and can achieve velocities over 1,500 ft/s (500 m/s). The most common types of pistol are the single shot, multi-barreled and semi-automatic.

A rifle, on the other hand, is a long barrel, long rage gun. It usually needs the support of the shoulder to fire properly. The shoulder helps absorb the force of the shot. It also needs both arms to fire. Due to their size, they cannot be carried around easily. People usually slung the rifles over their shoulders, as a bag pack, when it is not in use. This makes the shooter very conspicuous.

The name ‘rifle’ is derived from the rifling, which is present inside the barrel of the gun. The rifling spins the bullet at a very high speed and fires it with precision and accuracy. Rifles are most commonly used for hunting. There are many different types of rifles, including automatic rifles, semi-automatic rifles, Spencer rifles, musket, anti-tank rifles, etc.

Rifles have a much longer range than handguns; however they usually need to be reloaded quite often, as depended on the type of the rifle. Rifles achieve bullet velocities of over 3,000 ft/s (900 m/s).

However, both rifles and handguns have some advantage over the other. Such as, a handgun requires only hand to fire, which leave the other hand free. Rifles require both hands and a shoulder to fire, which means that the shooter has to stay positioned in one place. Using the free hand, a shooter can use a light and a handgun independently, as opposed to with a rifle which has the light mounted on the gun, so the shooter can only see where the rifle is pointing.

Pistols also provide the shooter with maneuverability. For example, an attacker can easily wrestle away a rifle from a defender, due to the long barrel, which gives the attacker something to grab at. However, a handgun is small and barely has any place that an attacker can grab.

Furthermore, a pistol is small, lighter, and easier to carry and conceal, whereas a rifle is longer, heavier, and harder to carry or conceal. Still, pistols tend to have low power than rifles. Due to this, many types of ballistic vest and armor have been developed which have the capability of stopping pistol bullets. Rifle bullets are much harder to stop.