Key difference: Samsung Galaxy S Duos is a dual-SIM phone that was launched in September 2012. The phone comes with a 4-inch TFT capacitive touchscreen, with approximately 233 ppi density. The device comes with Samsung’s TouchWiz UI on Android 4.0.4 ICS. The Samsung Galaxy S2 was launched in April 2011 and was one of the slimmest smartphones at that time. The phone offered additional feature, software updates, expanded hardware and a redesigned physique than the original S. Galaxy S2 sports a 4.3 inch Super AMOLED Plus capacitive screen that offers 480 x 800 pixels. 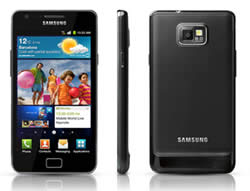 The Samsung Galaxy S2 was launched in April 2011 and was one of the slimmest smartphones at that time. The phone offered additional feature, software updates, expanded hardware and a redesigned physique than the original S. Galaxy S2 sports a 4.3 inch Super AMOLED Plus capacitive screen that offers 480 x 800 pixels. The screen is protected by Corning Gorilla Glass that makes it scratch proof. It also only weight about 116g at that making it a very light weight phone. The Samsung S2 was originally offered with Android v v2.3.4 (Ginger Bread) and is now available with v4.0.4 (Ice Cream Sandwich) and is upgradeable to v4.1 (Jelly Bean).

The Galaxy S2 has a 1.2 GHz dual core ARM Cortex-A9 processor that uses Samsung's own 'Exynos 4210' System on a chip (SoC). It also offers the TouchWiz 4.0 user interface, with hardware updates compared to the TouchWiz 3.0. The phone is available with 16 and 32 GB of internal storage with additional external storage up to 32 GB. S2 supports an 8MP rear camera and a 2MP front camera. The rear camera can record videos in full high-definition 1080p at 30 frames per second. The S2 also includes innovative features such as ‘motion’ an optional gesture-based interaction technology that allows users to use two fingers and tilting the phone towards or away from the person to zoom in and out, respectively. It also supports Voice Recognition, Google Voice Translation, Lost Phone Management and Swype typing feature. The phone also has the ability to support USB-on –the-go, which allows users to connect USB flash drives (with own power source) to the phone.