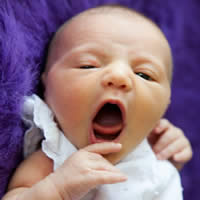 When a woman gets pregnant there are always chances that she may have more than once child in the same pregnancy; the higher the number of fetuses, the rarer the occurrence of it happening. For example, twins are more common compared to triplets, quadruplets, etc. Single birth basically means that the woman has conceived only one fetus, while multiple births mean multiple fetuses.

Single Birth is when a woman conceives one fetus that will grow into one child. The ovaries of a woman release one egg that is fertilized by the male sperm. The fused male and female gamete is referred to as a zygote or fertilized egg. The egg then grows into a child which is born around nine months from conception. 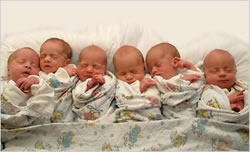 Now, multiple births are when a woman conceives more than one fetus. Multiple births are more commonly known as twins, triplets, quadruplets, quintuplets, etc. Multiple births can be monozygotic or polyzygotic. Monozygotic is when one zygote splits into two or more embryos resulting in that many children. Each embryo carries the same genetic material. Siblings that are a result of one egg are often identical and of the same sex. Polyzygotic is when the ovaries release more than one egg in the same menstrual cycle, which are then fertilized by sperm and grow into individual fetuses. Children that are result of polyzygotic eggs only share 50% of their genetic material. They are similar to normal siblings. They are often fraternal twins. A set of triplets could be a result of monozygotic as well as polyzygotic and are known as dizygotic.

Single birth as well as multiple births can also be a result of in-vitro fertilization. Multiple children that are more than the normal twins and triplets are a more common result of fertility treatment. Children in multiple births are often born premature and have a higher risk of not surviving to infantcy. Octuplets is the largest number of children that were successfully carried to full term with all children surviving.