Difference between Skydiving and Base Jumping

Key difference:  Both, Skydiving and Base Jumping are types of parachuting. Skydiving is a sport in which a skydiver jumps down from an airplane, whereas Base Jumping is an activity where the participant jumps from a fixed object. 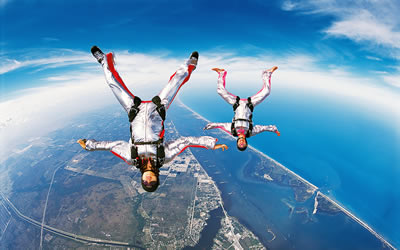 Skydiving is an exhilarating sport that involves jumping from an aircraft and free falling or parachuting back to earth. It is performed as an assortment of aerial maneuvers and stunts, like the acrobatics before deploying from a parachute. The participants jump or fall from the aircrafts at the desired high altitudes. It is a terrifying type of sport. The parachute used in skydiving slows the descent and allows the skydiver to land gently on earth. The jump heights typically range from 3000 to 15,000 feet, depending on the skydiving centers the individual selects for his/her jumps and it also depends upon the type of skydive he/she carries out. It is basically performed in two ways: individually and in groups. There are numerous companies around the world offering opportunities for skydiving.

Skydiving originated in the early 1797; Andre Jacques Garnerin jumped from a hot air balloon with a parachute, and marked the first incident of the true modern skydiving.

The Skydiving activity is carried out in two main steps, involving the actual freefall and the canopy flight phase. The actual free fall can be of long or short duration, which ends when a pilot chute deploys and pulls the parachute out from the container. Once the parachute is pulled out, the freefall finishes and the canopy flight phase begins, which ends with the landing. It is found that the skydivers regularly check their gear to ensure its good shape, and many of them also carry a backup parachute. Sometimes it is also found that the backup deploys automatically when a skydiver reaches a certain altitude. So this states that both the primary and backup parachutes have to be controlled with the steering lines, allowing the skydiver to control his/her descent.

There are various types of skydives, which follows some general disciplines. The jumps ranges from the "fun jumps", which are purely recreational type of skydive to competition jumps for forming large records. These categories are not all-inclusive, and skydivers can participate in jumps that involve the variations or combinations of different disciplines such as the: 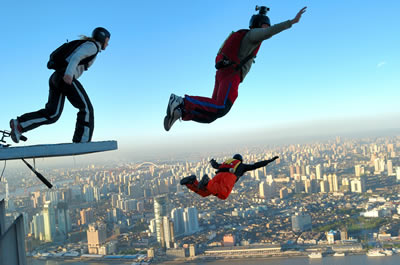 Base Jumping (also sometimes written as B.A.S.E. jumping) is a new level of reward and risk. In Base Jumping, the jumper jumps from a fixed objects and uses a parachute to break their fall.

The term "B.A.S.E." was coined by filmmaker Carl Boenish. He was a catalyst behind the modern BASE jumping. In 1978, he filmed the first BASE jumps, which included the ram-air parachutes and the freefall tracking technique, and marked the first beginning of Base Jumping.

The "BASE" acronym stands for mainly four categories of fixed objects from which an individual can jump, it comprises of Building, Aerial, Span, and Earth (cliff). It can also stand for Buildings, Antennas, Spans (Bridges) and Earth.

Base Jumping is an entirely different sport. It is a parachuting jump from a fixed object like towers or a large cliff. The Base Jumpers can also leap out from an airplane at a height of 15,000 feet and freefall over 100 mph. They usually jump off from a cliff, or from man-made objects, situated normally on lower altitudes. This makes them easy to deploy the parachute and avoid any malfunctions or problems. Actually, Base Jumping is illegal to perform in some places. Most Base jumps occur at altitudes of less than 2,000 feet (610 m), but usually not less than 200 feet (61 m). A typical jump from 500 feet (152 m) is about 5.6 seconds to the ground if the chute doesn’t open. A BASE jumper has to take care of the ‘safety margins’. This includes those jumps that are taken from the higher altitudes with the help of an airplane. The parachutes in this system is supposed to open quickly, at the time of lower airspeeds. Here, the shorter jumps are achieved in less comparative time. In base jumping, a bad jump may cause the jumper to lose control, which is hard to correct in the short distance to the ground. One of the most serious complications which can arise is when the chute opens backwards, which is called as an ‘off heading’ opening. This is a leading cause of the serious injuries and deaths among the people who participate in this sport.

Comparison between Skydiving and Base Jumping: