Key difference: The punctures of a snake bite are wider than the spider bite whose bite marks are almost next to each other. 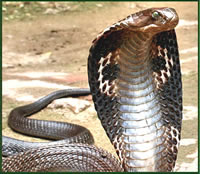 Majority of snakes and spiders are not poisonous. However, there are quite a few that are. Venomous snakes can be found on every continent except Antarctica. Spiders are active hunters and rely heavily on their bites to paralyze and kill their prey before consuming it. They usually do not attack a larger prey but if they feel threatened, they will stand their ground and bite in self defense. A snake, on the other hand, does not rely on venom, and usually strangles their prey. Snakes do bite when they feel threatened or cornered. If snakes and spiders are left alone when threatened, bites can be avoided.

Snake bites and spider bites are not that much of a problem in developed countries, but in developing countries, they can be quite serious as medical care is not that readily available. It is estimated that a large number of bites are not in reported to the local authorities.

A snake can inject a lot more venom than a spider in a single bite. The punctures of a snake bite are a bit wider than the spider bite whose bite marks are almost next to each other. However, a snake might not inject venom into every bite, whereas a spider usually does.  A bite from a snake is more likely to result in death than a spider bite. Spider bites will cause pain and inflammation as spiders are adept in delivering toxins. However, they do not inject the toxins deep enough into the skin to cause death.

A snake bite can inject about 450mg or more venom inside the human’s body. The bite of a black mamba, considered one of the most poisonous snakes in the entire world, can kill an average human being in about 30 minutes, when no anti-venom has been applied. While treating a snake bite it is extremely important to know which snake is the bite from, as only the correct anti-venom will neutralizes the venom.

Spiders, on the other hand, are fairly less dangerous. There are only 200 spider species out of the known 40,000 that are known to have serious, potentially lethal bites. While, the others do bite, and some have very nasty bites, their bites will usually have no serious medical consequences.

A comparison between snake bites and spider bites: