India is a very diverse country and has multiple different cultures that differ in language, traditions and of course cuisine. India has a lot of variety in terms of cooking and different parts of India, such as North, South, East and West all use different methods and ingredients in order to cook. It is believed that the different styles arise from the fact that Aryans eventually settled in the North, while the Dravidians settled in the South. Let’s look at the major different between the Northern and Southern food; along with a way to tell them apart. 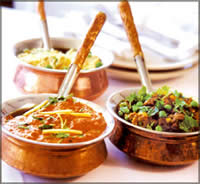 The staple crop in North India is wheat, so a majority of dishes are based around this crop. This crop is mainly used to make naans, parathas, rotis, chapattis, etc. Due to its geographical location it has a strong Central Asian influences in its food. The food is heavily shaped by the Persian and Mughlai style of cooking. The food can be both vegetarian as well as non-vegetarian. North India grows a variety of fresh seasonal fruit, vegetables and spices, which are all prominently found in different dishes.

The base of North Indian foods includes onions, tomatoes, ginger and garlic. The breads that are influenced by the Arabs include tandoori rotis and naans. North Indian food heavily relies on curries, spices, ghee and oil. Though plain white rice is also a part of the cuisine, it is more commonly made into pulaos (pilafs) or biryanais. The foods use vegetable oils such as sunflower, canola, and sometimes mustard. Ghee is normally reserved for special occasion cooking or used mainly in sweets and desserts. Spices and ingredients that are used include coriander, cumin, dry red chilies, turmeric, chili powder, cardamom, cinnamon, cloves, garam masala, aniseed/fennel, etc. North Indian curries are thick in texture, creamier as it uses heavy cream and yoghurt for bases and moderately spicy.

Sothern Indians dishes most commonly include rice and coconut in their dishes, as rice is the staple crop in South India. Coconut is used to make various kinds of chutneys, and curries. A mix of rice and lentils are used to make the most popular food of the South; dosas and idlis. Seafood dishes are also commonly found in the South. In comparison to north, dishes in the south are considered healthier as they do not include rich creams and ghee. Southern dishes can also be vegetarian and non-vegetarian. South Indian dishes are much spicier than northern dishes.

Southern dishes are said to have sharp, intense flavors. The meals are generally surrounded around rice being paired up with sambaar, rasam, dry and curried vegetables and a lot of coconut based chutneys. The curries have higher water content and have more nutritional benefits due to use of coconut and native fruits. South Indian foods include the cuisines found in the states of Andhra Pradesh, Karnataka, Kerala and Tamil Nadu. Popular South Indian dishes include dosa, idli, sambar, vadas, rasam, and uthappam. Most popular South Indian dessert is the Payasam, which is similar to kheer in the north.

The North and South Indian cuisine each offers some amazing foods and sweets, while some people prefer one over the other. Even with the culture differences, southern foods are popular in the north and northern foods have developed a fan base in the south.

Like any country’s cuisine, Indian food varies in flavor and preparation from region to region. Northern and Southern India have food differences as obvious to Indians as the difference between food from the Pacific Northwest and the deep South is to Americans. One of the major crops of the North India territory is wheat, and therefore, in most of the North Indian Food recipes, you will discover the influence of this crop by and large. The Sothern Indian food, on the other hand, is mostly composed of the dishes in which the utilization of the rice and coconut is very common.