Difference between SSD and Hard Drive

Due to the technology boom, almost everything is done on the computer these days. With the ever expanding amount of data one can require or pile up, additional storage methods are required. Additional storage methods include SSD and Hard Drives, both of which offer users to save up to 2TB of data in a handy portable device. Both of these use different methods to store data on the device. 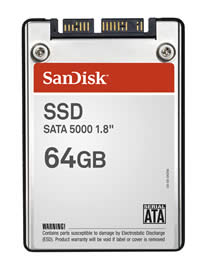 A solid-state drive (SSD), also known as solid-state disk or electronic disk, is a device that allows users to store data. It uses integrated circuit assemblies as memory to store data persistently. Since 2010, many SSDs are using NAND-based flash memory, which stores data without requiring power. Original SSDs were also made from RAM, which would require external sources of energy in order to support the data.  SSD does not include any moving parts and are less susceptible to physical shock, offers low read and write rates, are usually silent and are more expensive compared to HDs.

SSDs were made in the 1950s and employed technologies such as magnetic core memory and card capacitor read-only store. This was however abandoned in 1970s and 1980s, when it was implemented in semiconductor memory for early supercomputers of IBM, Amdahl and Cray. These were also still too expensive and rarely used. The SSDs became popular in 1995, when they were launched with flash memory by M-Systems.

Flash memory use minimal power to transfer files and weighs less than 30g. A drawback of flash drive includes that it has a limited write/erase cycle, after which the device needs to be replaced. They also consume really less energy and do not require any additional cooling systems as it does not emit a lot heat as a byproduct. These days, flash memory allows up to 100,000 write/erase cycles, depending on chip type and a 10 year shelf storage time. In terms of price, per GB data is more expensive compared to external hard drives. SSDs are also available in hybrid form which combines SSD and HDD features in the same unit to allow improved performance. 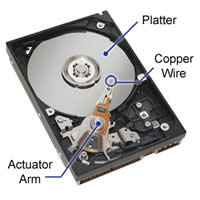 An external hard drive or a portable hard drive works in the same way as the internal hard drive, except that these are portable. A hard drive is a non-volatile random-access, magnetic data storage device. It was introduced by IBM in 1956 and has been the most commonly used storage device in computers. A hard disk drive contains one or more rigid rapidly rotating discs coated with magnetic material. Magnetic heads are placed on a moving actuator that is used to read/write data on the magnetic tape. The read/write heads are supported on a thin layer of air inside the enclosed disk unit with only tiny gaps between the heads and the disk surface.

A hard disk is similar to old cassette tapes, which also recorded data on a magnetic tape, though these have a much higher storage capacity and does not require reading the whole tape in order to find one significant file. Modern drives have platters (the discs) coated with two parallel magnetic layers, separated by a 3-atom layer of the non-magnetic element ruthenium, and the two layers are magnetized in opposite orientation, in order to keep from losing data to thermal effects.

External hard disk drives are available with data up to 2 terabytes; however, due to system usage and reporting, not all of the specified storage is ever available for user storage. These hard drives are also connected using USB cables and are plug and play devices. They are usually available in 2.5 inches to 3.5 inches in size and are available with storage capacity up to 160GB, 250GB, 320GB, 500GB, 640GB, 750GB, 1TB, and 2TB. External hard drives can either come preassembled or can be assembled by combining a hard drive with a USB or similar interface.

A detailed comparison is available in the table below. Some categories are acquired from Wikipedia: