Difference between Stickball and Cricket

Key Difference: Stickball is actually a street game that is very similar to baseball and also includes bases. It is an informal game that has not been codified by a state or international governing body. Stickball is played using a broom handle and any ball relatively the size of a tennis ball. Cricket is popular sport that is played between two teams of 11 players each on a rectangular 22-yard long pitch. The main objective of the game is for the batsmen to strike the ball and then run across the pitch to try and accumulate ‘runs’ or ‘points’. The cricket bat is flat on the striking side and has a ridge on the back. 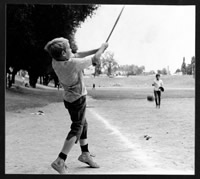 Stickball is actually a street game that is very similar to baseball and also includes bases. It is an informal game that has not been codified by a state or international governing body. However, many places have actually set up leagues that allow people to come together and play against each other in teams. Stickball is popularly played sport in large cities in the Northeastern United States, especially New York City and Philadelphia. Stickball is believed to have originated in the streets of New York around the 1930s, with the exact origin dates still unknown. It is believed to have its roots during the Great Depression.

Stickball is played using a broom handle and any ball relatively the size of a tennis ball. The ball could be made of any material including rubber ball, leather ball, etc. The rules for the game vary depending on the people that are playing the game. Though, the basic rules are similar to the rules of baseball, the rules change when it comes to pitching. There are three different styles of stickball and each is classified on the basis of the pitch: fast pitch, slow pitch and fungo. In fast pitch, the batter is placed against a wall or a fence that is marked with a square rectangle using a chalk. The pitcher throws the ball straight at the batter; if the batter misses the ball and the ball strikes the rectangle then it counts as a strike. In order for the ball to be counted as a strike it must have chalk on it. If there is no chalk it counts as a ball. This type is most commonly played in Staten Island, Brooklyn and Long Island schools. In slow pitch, the pitcher stands approximately 40 to 50 feet away from the batter and throws the ball. The batter must strike the ball after one bounce. In fungo, the batter tosses the ball into the air and then strikes it on the way down after one or two bounces.

Depending on the rules established before game play, the batter could be out in one, two or three strikes. If the ball lands on a roof or breaks a neighborhood window, this counts as a home run. The batter must also run bases to earn runs. The bases could be man-hole covers, bags of sand or any other objects. Many versions determine hits by how far the ball travels with the batter not having to run bases; however leagues usually have the batter run bases. The most popular league for Stickball is New York Emperors Stickball League. Stickball has many variants in Boston and Toronto, which are similar to stickball but they are different in game play and equipment.

Cricket is popular sport that is played between two teams of 11 players each on a rectangular 22-yard long pitch. Earlier forms of cricket have been traced back to the Tudor times in the early 16th century England. The earliest written evidence of cricket refers to the sport ‘creckett’ in 1598. Cricket became an organized sport, played for high stakes during the 17th century. The main objective of the game is for the batsmen to strike the ball and then run across the pitch to try and accumulate ‘runs’ or ‘points’. The defense team, which is known as the fielding team, will try to catch the ball or to run the ball back to hit the wickets, which would cause the batsman to be out. The ball must hit the wicket when the batsman is not inside the boundary line. When the bowler bowls, the ball must hit the ground one time before the batsman can hit the ball. Another way to accumulate points in addition to running is to try and get the ball to go beyond the boundary line. If the ball rolls on the ground and touches or passes the boundary line this awards the batting team 4 runs, if the ball crosses the boundary line but does not touch the ground until after it crosses the boundary line, this awards 6 runs.

The cricket bat is flat on the striking side and has a ridge on the back. The bats are commonly created using willow wood and connected to a long cylindrical cane handle. Willow wood is popular and can sustain large amounts of force without denting or shattering. The handle is covered in a rubber grip. The lengths of the bats differ depending on the person and the game, while smaller bats have been made for children as well. However, a professional bat may be no more than 38 inches in height and 4.25 inches in width. Though there is no standard, the bats commonly weigh from 2 lb 7 oz to 3 lb.

The ball is made up of cork and is covered with leather. The ball is circular in shape and weighs between 5.5 and 5.75 ounces and measure between 8 13/16 and 9 inches in circumference. Two different balls are used depending upon the game and though they are designed the same way they differ in color. White balls are used for One Day International matches, while red balls are used for Test matches. The balls are hard and heavy and require the players closest to the batsmen, including the batsmen, to wear protective padding and helmets. The field is 66 feet; however a big part of the game is played on a small strip of dirt in the center. Penalties that can be awarded in the game include no ball, wide, bye and leg bye. While no ball and wide usually award one penalty run, bye and leg bye allow the batsman to acquire as many runs as he can. There are ten ways in which a batsman to be dismissed from the game: bowled, caught, leg before wicket (lbw), run out, and stumped, hit wicket, hit the ball twice, obstructed the field, handled the ball and timed out. Once the batsman is out, another batsman replaces him and the game resumes. The game ends when 10 out of 11 batsmen are out or the overs are finished. Each over consists of six balls and the overs in a game vary depending on the type of match. For example: T20 matches have 20 overs, while One Day matches have 50 overs.