Difference between Stars and Planets

Key difference: Stars and planets are two different types of astronomical objects existing in our universe. A planet is a large object that orbits around a star or a stellar remnant and has an atmosphere. A star, on the other hand, is a massive, luminous sphere of plasma that is held together by its gravitational pull. A solar system is usually made up satellites revolving around planets, which are in turn revolving around a star.

Stars and planets are two different types of astronomical objects existing in the universe. A planet is a large object that orbits around a star or a stellar remnant. This is mainly due to its own gravity and gravity of the star that allows the planet to have an orbit around the star. The orbit is usually elliptical in shape, mainly depending on the gravitational force of the planet and the star.

A star, on the other hand, is a massive, luminous sphere of plasma that is held together by its gravitational pull. The planets revolve around the star. The obvious example of this is Earth, which is a planet, revolves around the closest star in its vicinity, i.e. the Sun. Most stars in the universe are much larger than the sun. Some are even up to 1,000 times as large. The star is also the source of most of the energy on the planets. The planets are able to reflect the light cast by the star.

A solar system is usually made up satellites revolving around planets, which are in turn revolving around a star. Similarly, our solar system is made up of the Sun and eight planets, including Earth, and their corresponding satellites or moons. From Earth, we can see many of the planets in our solar system as well as many distant stars. These stars appear as a mass of fixed luminous points in the sky due to their immense distance. Humans have often named prominent stars and have grouped them together into constellations.

Also see: Difference between the galaxy and universe

Stars are usually made up of two gases, hydrogen, and helium. Planets, on the other hand, are mainly made up to rock and minerals. Stars contain atomic energy at their center which makes them hot. This atomic energy is used to constantly power nuclear fusion. The star is constantly converting hydrogen nuclei into helium nuclei. This reaction gives off massive amounts to heat and light. 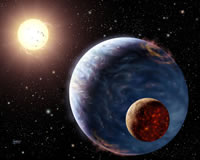 There are many different types of stars, including a white dwarf, a neutron star, subdwarf star, blue dwarf, red dwarf, giant star, supergiant, hypergiant, etc. Even black holes are the remnants of a star that has collapsed.

There are many differences between planets and stars. Firstly, planets revolve around stars. Stars have a continuous nuclear reaction going on it their core, which makes them hot. Planets absorb this heat and light, and to some extent reflect it back. Planets have atmospheres, whereas the heat of the star burns off any chances of an atmosphere.

Furthermore, from our relative position on Earth, stars appear to have a fixed location in the sky. Stars also appear to twinkle due to solar flares and such. Other planets in our solar system appear to change location in the sky every night. This is mainly due to the planets’ orbit around the sun.

There are many more differences between stars and planets and even between different types of stars. However, they are too technical to discuss in length.

Also see: The difference between quasar and pulsar