Difference between Galaxy and Universe

Key Difference: A group of numerous stars, dust, planets and other interstellar objects, tied together by a gravitational force, is known as a Galaxy. The universe comprises of everything that exists in the form of matter or energy. A smallest tiny particle of sand is also a part of the Universe and similarly, the largest Galaxy also forms a part of the Universe.

Did you ever crave for a telescope? Or astronauts and astronomers fascinate you more than doctors and engineers? If yes, then certainly you are inquisitive about the Universe and all its components. These terms sound fascinating but at times we may find difficult to differentiate between them. Galaxy and Universe can sometimes be referred to like one thing, as we and our surrounding everything is a part of the Universe as well as a Galaxy known as Milky Way. However, they both are different from each other. Let us understand the differences between the two.

Also see: Difference between the World and the Universe 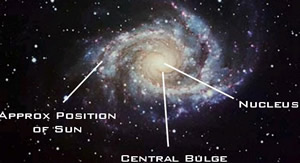 A collection comprising of stars, dust, planets, and other interstellar matter bound together by gravity is termed as Galaxy. A Galaxy can contain any number of elements. For example, a small Galaxy may just comprise of a few thousand stars, whereas a large Galaxy may contain billions of stars in it.  Milky Way is an example of a Galaxy; it is a Galaxy that consists of our Earth and Sun. The astronomers can only provide information about the known and observable Galaxies in the Universe. However, there might be various other Galaxies present in the whole Universe. There are mainly three types of Galaxies

1. Spirals: These  Galaxies are little flattened and their ellipsoidal systems are supported by the random motions exhibited by the stars. In these kinds of Galaxies, the disk contains stars, planets, dust, and gas. They all rotate around the galactic center and in a regular manner.

2. Ellipticals: They have comparatively more flattened disks and are also supported by the rotation. These are also known as disk Galaxies. Giant elliptical galaxies are considered to be about two million light-years long.

3. Irregulars: The shape of this type of Galaxy is very different from elliptical and spiral and lack any regular form or structure.

Also see: The difference between Galaxy and Solar system

The total luminosity of a Galaxy can be directly related to the total number of stars present in the Galaxy. Galaxies radiate a continuous spectrum of energy and thus, these spectrums are highly useful in understanding these Galaxies. There are uncountable Galaxies that are existed in the Universe that is known to us. Galaxies that contain less than a billion stars are termed as “Small Galaxies.”Galaxies may occur alone or in pairs. The Galaxies that are near to each also influences each other. Galaxies within groups tend to interact with each other and can even merge under the influence of interactive gravity.

Astronomers generally believe that Galaxies were formed after the cosmic phenomenon known as ‘Big Bang’. This phenomenon is held responsible for the creation of the Universe. It is believed that it took place nearly 10 billion to 20 billion years ago. It is believed that a bubble that was extremely hot and dense exploded, and then exploded particles formed various astronomical objects. Name of some of the Galaxies is Milky Way, Andromeda, Cigar Galaxy, and Comet Galaxy.

The universe can be understood as a vast space, that vast that it holds everything that exists. How big is the Universe? It is difficult to answer and the astronomers always try to research on this particular subject. It is believed that after the Big Bang explosion, the Universe was created and since then the Universe is constantly into motion.

The universe consists of both matter and energy that exist. Scientists believe that the Universe is expanding and this is the evidence of Bing Bang phenomenon that took place nearly 13.7 billion years ago. Scientists can also tell whether an object is approaching towards Earth or moving away, with the help of object’s electromagnetic spectrum. The shift in the spectrum is used for such kind of calculations.

Thus, we can say that the Universe is the superset that contains all the elements that exist. It also consists of all the Galaxies. Therefore Galaxies are just one of the components of the whole Universe.