Difference between Galaxy and Solar System

The solar system and a galaxy are two different terms but sometimes are confused with one another. A solar system is a specific kind of system in which the Sun is at the center. The solar system consists of anything that orbits the sun or orbits the planets which orbit the sun. For example, the moon is a part of our solar system. A galaxy is a huge collection of stars that are held together by gravitational attraction. There are 100 million to over a trillion stars within a galaxy. It consists of interstellar gas, star clusters, and numerous star systems. Many solar systems can be part of a single galaxy but not the other way around. 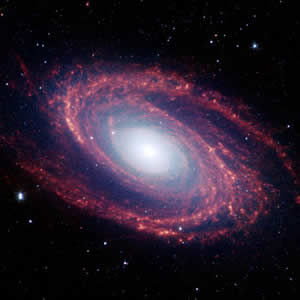 According to Wikipedia, a galaxy is a massive, gravitationally bound system consisting of stars, stellar remnants, an interstellar medium of gas and dust and dark matter. The word galaxy is derived from the Greek word ‘galaxias’, which literally means "milky". It is used as a reference to the Milky Way.

Galaxies contain varying numbers of planets, star systems, star clusters and types of interstellar clouds. In between these objects is a thin interstellar medium of gas, dust, and cosmic rays. They usually have a massive black hole at its center. They also consist of dark matter. Dark matter is basically a type of matter which has gravitational effects that have been detected. The dark matter, however, cannot be visibly seen because it does not emit any radiation. It is considered that there are some active galactic nuclei found at the core of some galaxies. The Milky Way galaxy is known to harbor at least one such object.

Galaxies are considered to have been categorized according to their apparent shape. A common example is an elliptical galaxy, which has an ellipse-shaped light profile. Spiral galaxies are disk-shaped with dusty, curving arms. Those with irregular or unusual shapes are known as irregular galaxies and typically originate from the disruption by the gravitational pull of the neighboring galaxies. Such interactions between the nearby galaxies may ultimately result in a merger, and sometimes induce significantly increased incidents of star formation leading to starburst galaxies. Smaller galaxies are referred to as irregular galaxies. 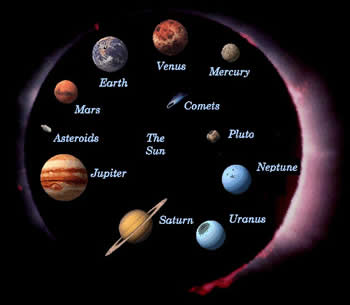 According to Wikipedia, the Solar System consists of the Sun and its eight planets. There are also a number of smaller planets, satellites and other objects orbiting around the sun.

The Solar System was formed 4.6 billion years ago by losing the gravitational pull from a giant molecular cloud. The majority of the cloud mass of the system is in the Sun and the rest is in Jupiter. The four inner planets, Mercury, Venus, Earth, and Mars, are called terrestrial planets. They are primarily composed of rock and metal. The four outer planets are called the gas giants, as they are substantially more massive than the terrestrial planets. The two large planets, Jupiter and Saturn, are composed mainly of hydrogen and helium. The two outermost planets, Uranus and Neptune, are composed of substances with high melting points and are called ‘ices’. They are often referred to separately as ‘Ice Giants’.

Also read: Difference between a galaxy and universe

The Solar System also contains a number of regions populated by smaller objects. Within these populations, there are several dozen other thousand objects that may be large enough to have been rounded by their own gravity. Such objects are referred to as dwarf planets. A few identified dwarf planets include the asteroid Ceres and the trans-Neptunian objects like Pluto, Eris, Haumea, and Makemake. There are various other small-body populations which include comets, centaurs and interplanetary dust that travel freely between regions. Six of the planets and many of these smaller bodies are orbited by natural satellites. They are usually termed as ‘moons’ after the Earth's Moon. Each of these outer planets is encircled by rings of dust and other small objects.

The Solar System is located within one of the outer arms of the Milky Way galaxy, which contains about 200 billion stars. Many solar systems can be part of a galaxy but a galaxy cannot be part of a solar system.

Difference between Galaxy and Solar System: