Difference between Sushi and Sashimi

Key Difference: Sushi is mainly cooked rice with vinegar combined with other ingredients, usually raw fish or other seafood.  Sashimi is thinly sliced raw seafood and is only accompanied by sauce.

Sushi has gained a lot of popularity in today’s world and has become a delicacy. Sushi is known as any kind of dish involving raw fish; however this is not the case. Sushi is only rice that is cooked with vinegar. Sashimi is also a type of dish that is served alongside sushi. These two dishes differ from each other. 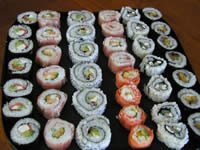 Sushi is one of the most popular Japanese dishes known worldwide. Sushi is mainly cooked rice with vinegar combined with other ingredients, usually raw fish or other seafood. Sushi is made up of two parts, shari and neta. Shari is the cooked rice with vinegar, while neta refers to the various other ingredients. There are many types of sushi; nigiri -zushi (hand shaped sushi), oshi-zushi (pressed sushi), maki-zushi (rolled sushi) and chirashi-zushi (scattered sushi). Sushi, literally translated means sour tasting, this is mainly because of the vinegar rice and fermented fish, which was originally used to make sushi. The original type of sushi, today as nare-zushi, was developed in Southeast Asia what is now known as Mekong River and then spread to southern China before it reached Japan.

The different types of sushi are:

Sashimi is thinly sliced raw seafood and is only accompanied by sauce. It is also used to top sushi along with other garnishes. However, it is considered pure sashimi if it is served only accompanied by soy sauce or wasabi sauce. Sashimi is usually served on top of shredded daikon (white raddish) and shiso leaves. The best way to eat sashimi is to dip it in soy sauce and eat it raw; the garnishes can also be dipped and eaten raw. Depending on the type of sashimi, ground ginger can also be served along with the dish. Sashimi is often served as the first course in a formal Japanese meal, but in some places it can also be served as the main course, presented with miso soup and rice. Many Japanese people believe that sashimi should be eaten before the palate is overpowered by other strong flavors.

Popular ingredients for sashimi include:

This is really interesting, You’re a very skilled blogger. I have joined your feed and look forward to seeking more of your magnificent post. Also, I’ve shared your website in my social networks!