Difference between Symptom and Syndrome

Key Difference: Symptoms are the things that can only be felt by the patient. These are the things that a patient experiences about the illness, injury or disease. These must be described to the doctor, in order for him or her to diagnose the patient. Syndrome is the group of various features, signs, symptoms, phenomena or characteristics that are clinically recognizable. 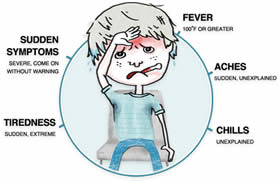 The terms symptom and syndrome can puzzle a person every time he goes to a doctor. Whenever a person is sick, and if someone asks what happened or how they are feeling, people start describing their symptoms, but what are symptoms?

A symptom was derived from the Greek word, meaning ‘misfortune’ or ‘accident’. Symptoms cannot be felt by others besides the patient. The patient experiences illness, injury or disease. These must be described to the doctor, in order for him or her to diagnose the patient. Actually, a diagnosis is 80% to 90% based on the symptoms as felt and described by the patient, while the rest will be based on signs and laboratory results. Symptoms can include pain, nausea, chills, numbness, fatigue, vertigo, malaise, itching, stomach cramps, burning on urination, etc. The symptom caused by a syndrome does not have an established reason behind it.

Syndrome is the group of various features, signs, symptoms, phenomena or characteristics that are clinically recognizable. The term syndrome is derived from the Greek word sundrome, meaning ‘along, with together’ or ‘running together’. A syndrome may produce a number of symptoms without an identifiable cause. There are so many reasons of syndromes that are not yet identified. The doctor may prescribe temporary medications that helps in controlling one’s symptoms. For instance, the reasons behind a chronic fatigue syndrome have never been established. A psychological disorder or other abnormal conditions are the main symptoms that indicate or characterize a disease.

Comparison between Symptom and Syndrome: