Difference between Taking a Bath and Shower 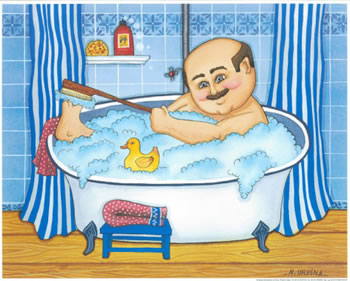 The terminology behind taking a bath or taking a shower might confuse some people, specially people from most places in the world that do not have the luxury of having both. Hence, the may use the terms interchangeably without realizing what those terms actually mean.

The phrase ‘taking a bath’ comes from the traditional word ‘to bathe’, which means to ‘wash by immersing one's body in water.’ While in the olden day people bathed in bodies of water, such as seas, rivers, lakes, etc. Eventually people didn’t have access to them, so they evented public baths, and then eventually the bathtub for privacy, and also hygiene, as it is generally not a great idea to share the same bath with hundreds of people carrying millions of bacteria. Bathtubs were originally made from wood, but today, are typically made from ceramic or plaster. So, the phrase taking a bath typically refers to this. Basically, it mean to clean oneself by soaking in a tub full of water.

However, with the advent of indoor plumbing came the shower. The shower is a device which sprays water from a spout under which a person can clean themselves. The water is continuously drained off. The shower is named as such due to its original meaning of ‘brief and usually light fall of rain, hail, sleet, or snow,’ as the water sprayed from the show tends to look like rain.

Each one has its own benefits. The bath is good for soaking one’s body in warm water. Hence, it is more relaxing and time consuming. The shower is generally quicker, and more efficient for cleaning oneself, as the dirt and grime tends to drain off with the water, whereas in the bath the dirt, grime, and soap tend to collect in the water, which may not feel clean after a bit. 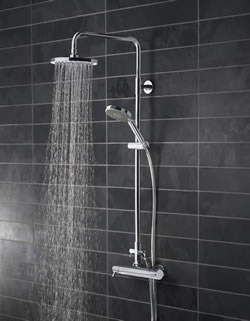 Generally speaking, taking a bath usually tends to use more water than a shower.  However, the actual consumption depends on a number of factors, such as the size of the bathtub, and the duration of the shower. A standard sized bathtub holds about 42 gallons (159 liters) of water; however, it is rarely filled to the top during a bath as space is left for the body to submerge. So, let’s take into consideration that a tub uses about 30 gallons (113.56 liters) of water.

Additionally, many people prefer to rinse off with a quick shower after a bath because lying in the same water that has been polluted with the dirt from the water does not feel clean to them. Hence, these people tend to take a bath to soak their body and then a quick rinse to wash of the residual soap and grime.

Comparison between Taking a Bath and Shower: