Difference between Turtles and Tortoises 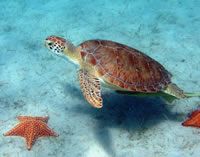 Another term is a terrapin; these are the ones that spend their time on both land and in water. They always live near water, along rivers, ponds, and lakes, and are commonly found in brackish, swampy areas. However, they are most often than not called turtles and sometimes as tortoises.

Both, tortoises and turtles are ecothermic (cold-blooded) and rely on their surrounding as a source of heat. Their body is also covered with a shell. The upper part of the shell is called Carapace, whereas the lower part of is called Plastron. The Carapace and the Plastron are attached at the end by a bridge. This means that the head and limbs of the turtle or tortoise may be withdrawn from the shell. However, the whole body can never be totally detached from it, as the shell is part of the turtle’s backbone and ribcage.

Turtles and tortoises do not have ears; however they can feel vibrations and changes in water pressure. They use this technique to find food or to detect a predator. They have a good sense of smell, which also help them seek food. The skin of a turtle or tortoise may look leathery and tough but is actually very sensitive. This is especially true of land tortoises. 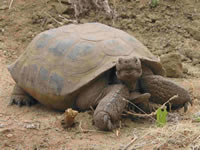 Essentially, turtles are smaller in size and their life spans are lower than tortoises'. Across many cultures, tortoises and turtles are symbols of longevity, wisdom and are often part of the creation myths. Currently, turtles and tortoises are in extreme danger of extinction. This is extremely true for many specific species. This is mainly due to wipeout and pollution of their natural habitats, as well as due to over hunting of the creatures.

A detailed comparison between turtles and tortoises: