Difference between USA and Canada

Key difference: The main difference between USA and Canada is in their government. USA is a federal constitutional republic, whereas Canada is a constitutional monarchy. Further differences include geographic and climate. Canada also differs in its stance against some political and cultural aspects. 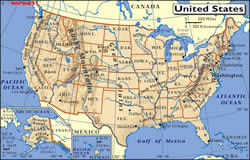 Canada is located in the northern part of North America. It is the world's second-largest country by total area. It consists of an advanced economy, considered one of the largest in the world. The economy is based upon its abundant natural resources, as well as its well-developed trade networks, including ones with USA.

Canada also has the world’s ninth highest per capita income, the sixth highest ranking in human development and is considered as one of the world's most developed nations, based on its above-average international measurements of education, government transparency, civil liberties, quality of life, and economic freedom.

Both are multicultural nations, as both as rich in regional, aboriginal, and ethnic subcultures. The also support numerous immigrant communities which have added to their multi-ethnicity.

Further differences include geographic and climate. As Canada is situated more north and closer to the Artic, its climate is colder. Winters can be harsh with snow covering the ground for almost six months a year. In some areas of the north snow can persist year-round. However, in some costal areas and areas near its southern borders can have a temperate climate with a mild and rainy winter.

USA, on the other hand, has a varying climate, from cold in north, north-west and north-east, to even tropical and sub-tropical in south, south-east, south-west. A major part of mid-west USA is in fact a desert with corresponding climate. 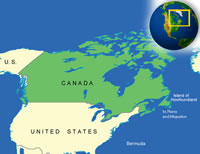 The weather and climate also gave rise to corresponding sports and pastimes. Canadians tend to prefer winter sports such as ice hockey, curling, skiing, etc., whereas, Americans’ preference varies from baseball to American football to even ice hockey in some regions.

The language of the two countries also differs. While, both USA and Canada speak English predominantly, Canadians tend to use British English and Americans use American English. A number of Canadians also speak French; hence French is considered a second language in Canada. A number of Americans speak Spanish; however Spanish is not officially a second language. The various different immigrants also speak their own languages.

Canada also differs in its stance against some political and cultural aspects. Canada has passed various government policies such as publicly funded health care, higher taxation to redistribute wealth, the outlawing of capital punishment, strong efforts to eliminate poverty, an emphasis on multiculturalism, strict gun control, and the legalization of same-sex marriage.

The American public medical system via Medicare and Medicaid is botchy at best. Furthermore, there is no united federal stance towards or against capital punishment, gun control, same-sex marriage, etc. All these issues and more are a state by state issue in the USA, with each enacting its own rules and laws in the matter.

Internationally, Canada tends to have a more reserve and quite presence. It is actually more involved in international matters than most people realize. USA, on the other hand, is predominant in international politics. USA never hesitates to make its policies known about a particular topic or to interfere in another country’s matter if it deems it necessary. For example: USA’s presence in Vietnam, Iraq, and Afghanistan; its peace making position between India and Pakistan; etc.

A comparison between USA and Canada: