Difference between Veins and Capillaries

Key difference: Veins, part of the circulatory system, are blood vessels that are responsible for carrying deoxygenated blood to the heart. The main function of a capillary is to connect the veins and arteries. As the blood flows through the arteries to the veins through the capillaries, they facilitate the exchange of water, oxygen, carbon dioxide, and other nutrients, a well as waste chemical substances between the blood and the tissues. 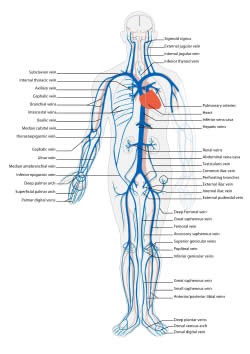 Veins, arteries and capillaries are major parts of the human anatomy and they play a very important part in how blood flows throughout the body. These are a part of the pulmonary and systemic circulation, which is important for surviving as they provided the needed nutrients and blood required by the body. Though they are similar in texture and definition, they differ in structure and function. Due to the slight differences, the terms can be confusing.

The veins are composed of three layers; the outer layer, tunica adventitia or tunica externa, is made up of connective tissue, thin muscle layer in the middle, called tunica media and an inner layer of epithelial cells known as tunica intima. The layers are thin and weak and collapsible, if no blood passes through them. The placement of the veins in a body varies depending on the person and is generally closer to the skin, which is why they can be sometimes seen on the hands and wrists. They are actually deep red in color, but due to the light reflection on the skin, they look blue. They veins are generally weaker compared to arteries because they carry blood at a lower pressure.

Veins receive blood from the capillaries after they have exchanged the deoxygenated blood with oxygenated blood. The veins then carry the waste-rich blood back to the heart, which goes through the process of being oxygenated again for transfer. The veins also have valves inside the last layer that keeps the blood flowing in one direction and eliminates backward flow. Veins play an important part in the body as it also has to work against the flow of gravity. The body that is below the heart requires an extra foothold in order for the blood to flow back upwards, against the gravitational force.

Capillaries are the smallest blood vessels in the body. The endothelial linings on the capillaries are actually only one cell thick. They are parts of the microcirculation. Capillaries measure 5-10 μm in diameter. They are much thinner and more fragile than veins. In fact, they are so narrow that blood cells must travel single file to pass through them.

The main function of a capillary is to connect the veins and arteries. As the blood flows through the arteries to the veins through the capillaries, they facilitate the exchange of water, oxygen, carbon dioxide, and other nutrients, a well as waste chemical substances between the blood and the tissues. Capillary beds cover the organs. Capillaries are also involved in dissipating excess heat. When an area of the body is overheated, the capillaries release the heat contained in the blood to the surrounding tissues. This results in the surrounding tissues taking on a red, flushed appearance.

There are three main types of capillaries: