Key Difference: Virtual memory is an abstraction of the main memory. It extends the available memory of the computer by storing the inactive parts of the content RAM on a disk. Whenever the content is required, it fetches it back to the RAM. Swap memory or swap space is a part of the hard disk drive that is used for virtual memory. Thus, both are also used interchangeably. 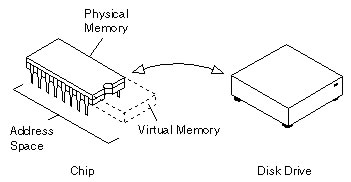 Virtual memory is quiet different from the physical memory. Programmers get direct access to the virtual memory rather than physical memory. Virtual memory is an abstraction of the main memory. It is used to hide the information of the real physical memory of the system. It extends the available memory of the computer by storing the inactive parts of the RAM's content on a disk. When the content is required, it fetches it back to the RAM. Virtual memory creates an illusion of a whole address space with addresses beginning with zero. It is mainly preferred for its optimization feature by which it reduces the space requirements. It is composed of the available RAM and disk space. 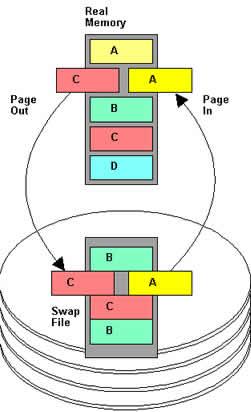 Swap memory is generally called as swap space. Swap space refers to the portion of the virtual memory which is reserved as a temporary storage location. Swap space is utilized when available RAM is not able to meet the requirement of the system’s memory. For example, in Linux memory system, the kernel locates each page in the physical memory or in the swap space. The kernel also maintains a table in which the information regarding the swapped out pages and pages in physical memory is kept.

The pages that have not been accessed since a long time are sent to the swap space area. The process is referred to as swapping out. In case the same page is required, it is swapped in physical memory by swapping out a different page. Thus, one can conclude that swap memory and virtual memory are interconnected as swap memory is used for the technique of virtual memory.

waal those are rich and easly understandable notes thnx