Key difference: White Gold is white in color and is plated with rhodium, in order to make it appear brighter and more silver in appearance. Yellow Gold is yellow in color and lacks the hardness of white gold. 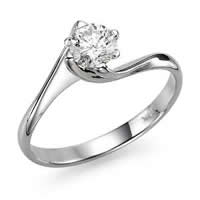 Gold is a pure element that is mined out of the earth. Since ancient times, it has a great monetary value assigned to it, due to its appearance, rare availability and symbolic value. It is famously used for jewelry, but also has practical uses in dentistry, electronics, and other fields as well. It is known for its high malleability, ductility, resistance to corrosion and chemical reactions, in addition to conductivity of electricity, which has led to many uses of gold, including electric wiring, colored-glass production and even for edible gold leaf.

Pure gold, as mined, is yellow in color and is relatively soft. However, this softness can be a disadvantage especially to jewelers, who need the metal to hold its shape and for any gem placing. Hence, gold is alloyed with other metals. This affects the color of the gold in addition to its hardness. The most common type of gold is the yellow gold we wear which is alloyed with zinc. Another is white gold, which has gained popularity over the last few decades. It is alloyed with silver, palladium or nickel, however, usage of nickel has reduced drastically, as many people are allergic to it. Gold is also available in tones of green, red, blue, purple and black.

White gold jewelry has become quite popular over the last few decades. This is mainly because it has the look of platinum and titanium, however costs much less than those metals. White gold was originally designed to create something different in the wedding rings, as there was no other option at that time, rather than yellow gold. Due to the silver or palladium, white gold tends to be more durable, harder and more scratch resistant than yellow gold. White gold is considered to pair well with diamonds, which makes it popular as wedding and/or engagement rings.

White gold is usually coated with rhodium, which gives it a nice shine. This is mainly done as white gold appears as light gray in actuality. The rhodium makes it appear brighter and more silver, the appearance that white gold is famous for. The disadvantage of this is that rhodium tends to wear off eventually, so one needs to get the jewelry re-plated. 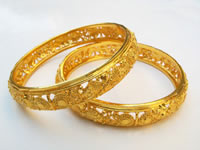 Yellow gold has always been considered to be timeless, classic and traditional. There is a wide range of classic yellow gold jewelry available in the market. A number of antique jewelry pieces dating back to the period of 1901 to 1910 and to the late 1930s and 1940s are also quite popular, as yellow gold was quite in fashion back then.

Yellow gold has always been popular, especially for providing a great contrast with sparkling diamonds. However, in modern times it has been criticized as giving the diamond and some other stones, an illusion of a yellow tint, due to light reflecting on the shiny metal.

Unlike white gold, yellow gold does not have plating that needs to be re-touched. It does, however need to be polished often, in order to maintain its shine. It is also softer than white gold, which make it more vulnerable to scratches and marks.