Difference between X-Ray and MRI

The field of science and medicine received a huge technological boost with the discovery of X-rays. X-ray imaging of the bones allowed the doctors to medically examine the internals of patients without having to open them up. MRIs (Magnetic Resonance Imaging) perform a similar function to x-ray minus the radiation acquired from the x-ray machine. MRIs were invented almost a decade after the first functioning x-ray and are technologically advanced. Though, both of these machines have similar objective, they carry out these functions differently. Hence, they are considered as two different devices.

X-ray is a type of electromagnetic radiation. There are a variety of light and radio waves that belong to the electromagnetic spectrum.  The waves are classified by length of their waves into short waves, long waves, etc. X-rays have a wavelength in between 0.01 to 10 nanometers and are shorter compared to UV rays and longer than gamma rays. The x-radiation or x-rays were discovered by German physicist, Wilhelm Röntgen by accident. Röntgen was experimenting with electron beams in a gas discharge tube when he found that a florescent screen that was surrounded by thick black cardboard started to glow when the beam was turned on. After experimenting with a variety of different objects and noticing that the screen continued to glow, he placed his hand in front of it and saw that the silhouette of his bones were visible on the screen. He discovered the most beneficial use for this particular machine and named the radiation X-radiation, the ‘X’ standing for ‘unknown’.

The x-ray works by exposing the body or body part to the radiation. Depending on the density and composition of the tissues and bones, the radiation is absorbed by the object. The rays that do pass through are then captured by a detector or a film that provides a 2-dimensional representation of the structure. The workings of x-rays include how light photons work with atoms and electrons. Visible light photons and x-ray photons are produced by the movement of electrons in different energy levels or orbitals, when they drop to a lower level they need to release energy, and when raise to a higher level they need to absorb energy. The atoms that make up the human skin tissue absorb the energy exerted by light photons. X-ray waves have too much energy and because of the excess energy, they are able to pass through a majority of things. The tissues that makes up the skin has smaller atoms and hence to do not effectively absorb X-ray photons, while the calcium that makes up the bones have larger atoms and can absorb the photons effectively, resulting in the bones showing up white on the negative. The negative that is used to capture images is a transparent plastic film coated with light-sensitive chemicals. When the x-ray waves are propelled at the patient, the waves that pass through skin turns the negative black (this is because of the chemical, which when exposed to light turns dark), while the waves that are absorbed by the body are marked as white on the film.

X-rays became very popular in the medical feild as it allowed the doctors to see past the skin tissues and determine if there are any damages to the bone of the patient. This technique helps them determine if any bones are broken, sprained or may have sustained any other damage without having to open up the patient. Additional advancement to this technology has allowed doctors to even generate 3D images of the object that is scanned giving them a full circular view of the object. X-rays are often good for short use as prolonged exposure to radiation is hazardous to living organisms. X-ray machines are also used at airport terminals and other places that require high amount of security to scan bags, boxes, etc. without having to manually open and search each one of them by hand. 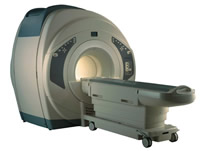 Magnetic resonance imaging (MRI) is an imaging technique that allows doctors to see the internal structure of a human body in detail without having to open up the person. MRI is also known as nuclear magnetic resonance imaging (NMRI), or magnetic resonance tomography (MRT). The MRI machine performs this job by using magnets and electromagnetic waves. The machine was created by physician and scientist, Dr. Raymond Damadian. Dr. Damadian, with the help of his students, built a machine that would allow magnetic field and pulses of radio wave energy to create a picture of the internal organs and other structures. The patent for the machine was filed in 1972, while it is believed that the first MRI performed was done in 1974 on a mouse. Damadian stated that the machine could be used to help diagnose cancer by helping determine tumors from normal tissues.

MRI machines work based on the fact that body tissues contain a lot of water and the protons of these water molecules can be aligned in a large magnetic field. Each water molecule has two hydrogen protons and one oxygen proton. The MRI’s magnetic field aligns these protons with the direction of the magnetic field. Then a radio frequency current is turned on, which produces an electromagnetic field. The field has just the right amount of frequency, which is absorbed by the protons that allow them to flip the spin direction. When the frequency is turn off, the protons’ spin returns to normalcy and the bulk magnetization becomes re-aligned with the static magnetic field. When the protons return to normalcy they emit energy signals, which are then picked up by the coils. This information is then sent to a computer which turns the signals into a 3D image of the object that is being examined.

MRI is more popular when trying to construct images of soft tissues in the body. MRIs can be used to image any part of the body including brain, heart, muscles, etc. These are beneficial when the doctor wants to check for injures in the tissues of a particular part of the body before determining whether a surgery is required. MRIs can provide 2D as well as 3D images of the body. MRIs are also beneficial to detect for tumors and cancers that may be present. MRI can be used for long periods without having to worry about exposure to any dangerous radiation. MRIs are also beneficial for detecting any irregularities in blood vessels, spine, bones and joints. They are predominantly used for medical purposes and are much more expensive than X-ray machines.

A detailed differentiation is available in the table below.