Difference between Hurricane and Tornado

Key Difference: A hurricane is tropical cyclone that is characterized by thunderstorms, strong winds and heavy rains. A hurricane needs a warm area to develop and cannot exist in cold areas; hence they are most common in tropical areas. A tornado on the other hand is a violent rotating column of air that is contact with both the ground as well as a cumulonimbus cloud. A hurricane can cause wind speed of 74mph to over 155mph, compared to a tornado whose wind speeds are between 40mph and 360mph. Tornadoes form on the land, while some can form on water; however a hurricane forms on the water. 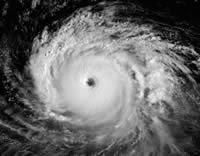 A hurricane is also known as a tropical cyclone. It has a closed, circular fluid motion. The low pressure center is known as the eye and the strong winds surrounding the eye is called the eye wall. A hurricane is characterized by thunderstorms, strong winds and heavy rains. A hurricane needs a warm area to develop and cannot exist in cold areas; hence they are most common in tropical areas.

Hurricanes generally develop where water is at least 80 degrees Fahrenheit (approx. 27 degree Celsius). They form from a low pressure system, where the hot air rises and cold air sinks underneath. Bands of rain clouds slowly form around the center of the system, while the winds and jet steam push the hurricane further into the ocean. It starts as a wave, turns into a storm and then finally a hurricane. Hurricanes travel clockwise in the Southern Hemisphere, and counterclockwise in the Northern Hemisphere. A hurricane can last up to days, if it receives the right pressure conditions. A hurricane will dissipate over ground, however can still damage due to the strong winds and rain. 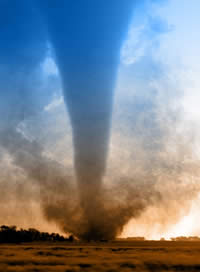 Tornadoes are not 'also known as cyclones'. Cyclones are completely different from tornadoes. Tornadoes are thin, funnel-shaped destructive tunnels of air, whereas cyclones are large winds, up to a possible 1000 kilometres across, and are most definitely NOT TORNADOES.