Summary: Android One is a standard which allows the entry level smart phones to have the same hardware and stock Android. These phones that are designed to target the masses of developing countries, that are venturing into the smartphone market for the first time. 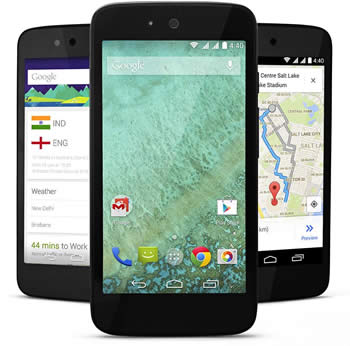 Android One is less than a type of phone, but rather more of a standard that is set by Google. Google has partnered with twelve phone companies such as HTC, Lava, Xolo, Intex, Asus, Alcatel Onetouch, Lenovo, Micromax, Spice Karbonn and Panasonic in order to create low end phones for the market. Android One phones are phones that are designed to target the masses of developing countries, that are venturing into the smartphone market for the first time.

The phones are developed with similar technology, hardware and software, allowing all users to purchase a phone that is relatively same. The only difference lies is the design of the phone by each company. This program aimed at creating “high-quality but low cost” phones was launched in June 2014, with India being the first market that is offering these phones.

What makes Android One phones different from other Android phones? Well, the phones will offer stock Android, which means it will be the Android that Google provides without any alterations or company changes. When a company takes the AOSP version of Android, they add and remove applications, alter the layout, add their own interface and then offer it to the consumer. So the consumer purchases what the company wants them to see, not what originally Google offered. Android One phones will offer what the original Android is supposed to be. The Android One phones will also be the first in line to receive the latest updates from Google, which means they will receive the Android Lollipop update.

So far, only three phones are available in the Indian market that are offering Android One: Micromax A1, Karbonn Sparkle V and Spice Dream UNO. Each entry-level phone comes with the same hardware.