Difference between Ovum and Sperm

Ovum is also known as an egg cell. These are the cells that forms a part of woman’s reproductive system and are one of the largest cells in the female body. On the other hand, sperm cells are the complete opposite of egg cells. The sperm is one of the smallest cells in the male body. They are  made up of a small nucleus with a small amount of cytoplasm, some mitochondria and a long tail. Egg cells and sperm cells are different from each other in nature, origin and purposes. Both of these cells play an important part in human reproduction and absence of any one would not allow reproduction to take place. Each cell is embedded with 23 chromosomes and when they fuse together the chromosomes pair up with each other and form a baby. 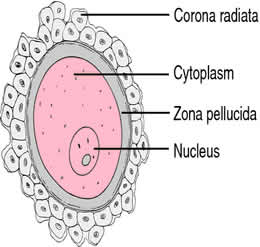 Ovum do not require a microscope to be seen and can be visible to the naked eye. It is also round in shape. The ovum has a large amount of cytoplasm (or nucleus fluid) in which the nucleus is dissolved until just before conception.

The nucleus inside the ovum is active and internally mobile. It has maximum mobility inside the cell due to the cytoplasm, while outside the nucleus is not mobile but goes in any direction, in which it is pulled. Ovum mainly consists of cell fluids. Ovum also has an active metabolism as substances are absorbed and released. An ovum has a limited life-span and once they are released from the ovaries they can only stay alive for about 12 to 24 hours and if they remain unfertilized they dissolve in the fallopian tube. There is also no way to be able to store ovum, but advance research has been able to grow ovum using stem cell research.

On the other hand, sperm cells are the complete opposite of ovum. Maybe, that’s where we get the notion that males are opposites from females. The sperm is one of the smallest cells in the male body. They are  made up of a small nucleus with a small amount of cytoplasm, some mitochondria and a long tail. They have a straight shape, compared to the round one of the egg cell. 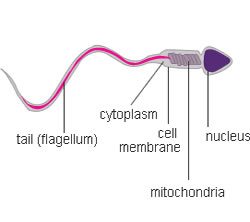 A sperm cell consists of a head, a mid-piece and a tail. The head contains the nucleus with densely coiled chromatin fibers, surrounded anteriorly by an acrosome, which contains enzymes used for penetrating the female egg. The mid-piece has a central filamentous core with many mitochondria spiraled around it, used for ATP production for the journey through the female cervix, uterus and uterine tubes. The tail or "flagellum" executes the lashing movements that propel the spermatocyte. The sperm cells are externally active and use their tails to swim against stream of fluid in the oviduct. Sperm cells are also metabolically passive and do not actively release and absorb substances.

Who is the authour of this page and when was it published?

Hi Maria, if you are looking to cite the page, please have a look at out Citation guidelines here: http://www.differencebetween.info/citation. Thank you.